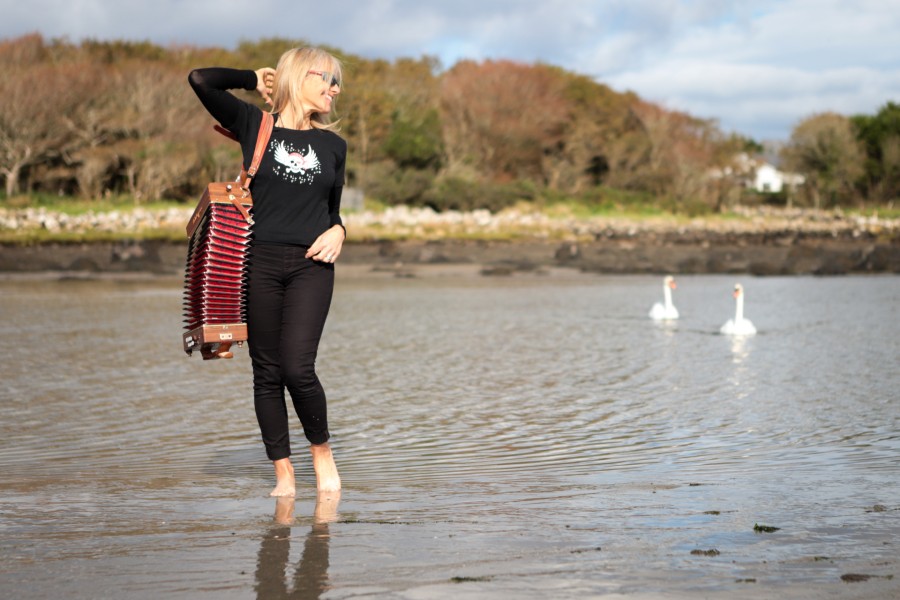 Sharon Shannon announces her latest studio album, ‘The Reckoning’ will be released on November 27th this year. This album was composed, written and recorded in its entirety during lockdown, featuring over a dozen remote collaborations from locations across the globe. Sharon is pulling out all the stops this year with her most innovative and original album to date. All the tracks on the album are newly composed original tunes and songs which are co-written by Sharon and band members and various guest collaborators.

Discussing the album, Sharon says: “Normally when we work on an album, we do one track at a time. But with this it seems to be an avalanche when you’re working on thirteen or fourteen tracks every day. It’s like a minefield!”

One of the founding melodies of the album was formed in an unlikely Lockdown scenario when Sharon received a Facebook Challenge from Robbie Henshaw to learn a new skill. After five days of intense practice, the viral ‘Jolly Roger’ Facebook video was born. The clip of Sharon and her electric guitar has accumulated over 289,000k views since its upload. If you listen closely, you can still hear Sharon’s original riff included in her track, ‘The Reckoning’

Since learning the electric guitar, something unlocked in Sharon’s creative muse. Tunes began to flow out of her and the first day she played ‘The Beast From The East,’ she knew there was something special here. According to the artist herself, a true artist doesn’t know how, why or when a creative streak will come to them. It cannot be controlled but if harnessed properly, magic will happen.

In light of travel restrictions, ‘The Reckoning’ achieves the impossible by combining the talents of musicians from across the globe, boasting one of Shannon’s most versatile creative ventures to date. The album finds its roots in Harmony Hall in Japan before making its way to Scandinavia with Nordic Folk band Dreamers’ Circus, to Jamaica for a Reggae reimagination of ‘Mursheen Durkin’ with Linton Kwesi Johnson, all the way back to a production studio in Lanzarote with previous collaborator and Lanzarote resident Craig Mulvagh.

Also featured on the album are former collaborators, Donal Lunny, Justin Adams, Dennis Bovell Dub Band and Le Vent du Nord from Canada. Producer Craig Mulvagh also worked with Sharon previously, engineering her ‘Sacred Earth’ album in 2016. Mulvagh faces his greatest challenge to date in bringing his coterie of Spanish, English, Scandinavian, French Canadian, West Indian, Irish, Hungarian and Italian musicians together to create a musical experience like no other in ‘The Reckoning’.

Sharon Shannon is an iconic Irish musician known for her arrangements of traditional tunes and Irish-influenced compositions. She has earned her name as a pioneer in the industry through her eccentric collaborations, not just in traditional music, but across multiple genres; Hip Hop, Cajun, Country, Classical and Rap.

In conjunction with the NUIG Music Department, Shannon will be filming the first in a series of Master Classes, to be filmed in December and used as part of the NUIG Music Degree. These will be made available online with new lessons uploaded on an ongoing basis.

Sharon Shannon acknowledges that this album would not have been possible without the continued support from the Department of Culture, Heritage & the Gaeltacht.