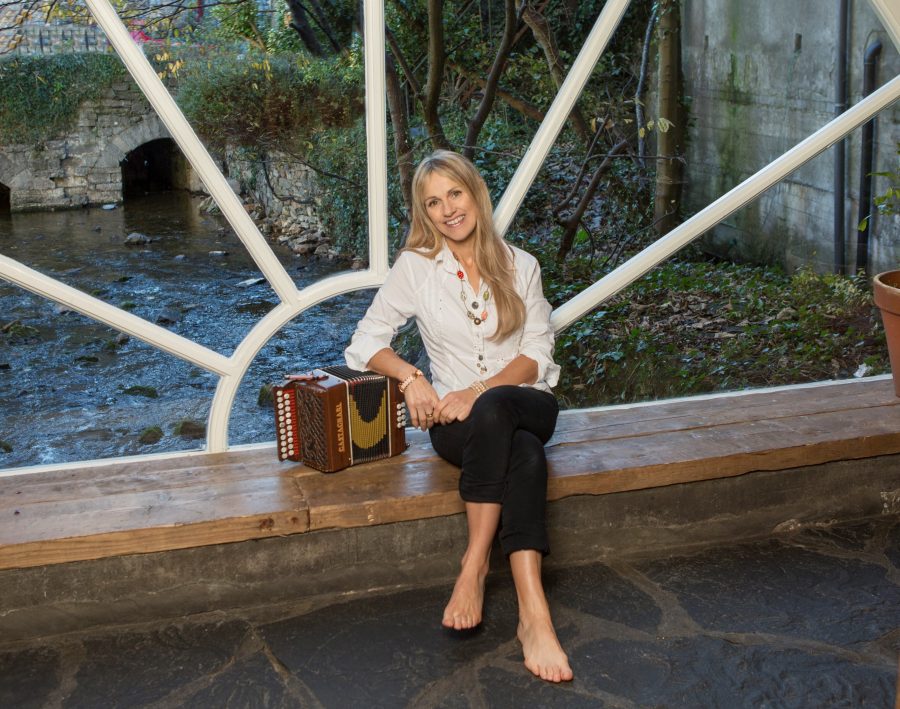 Sharon Shannon is a musician who likes to surprise. While she is best known for her arrangements of traditional Irish tunes and Irish-influenced compositions, she has always been eager to explore new styles, and to meet and work with other musicians. There are Irish influences here, of course, but these are cheerfully mixed in with often unexpected styles from around the world, including – for the first time – Africa.

Sharon has perfectly mastered an African/Irish crossover. But Sacred Earth is more than this: musical elements from the classical world, the Shetland Fiddle Tradition, Hip Hop, country and blues all conspire to make this album a ground-breaker.

She was helped in the project by Justin Adams, who co-produced the album, plays guitar and a variety of percussion instruments, and was, says Sharon, “the obvious guy to help us get that sound”.  The guitarist in Robert Plant’s band, The Sensational Space Shifters, Justin has long been an expert in African (and Middle Eastern) styles, and produced that great Malian band ‘Tinariwen’. He played on Sharon’s 2007 album ‘Renegade’, and Sharon wanted to work with him again both because of his African connections and because “he’s such a generous musician. I love his fearless approach to trying different ideas”.

As for Justin, he described the collaboration like this: “ever since a late-night music session at her house in Galway, I’ve been aware of the joy and openness that goes alongside Sharon’s rootedness in tradition. My musical passions that have led to immersion in Blues, North and West African music and Reggae sit easily with Sharon’s dancing rhythm, and show the ancient connections from South and East to West and back again, connections we need to celebrate more than ever”.

There is indeed a sense of celebration to this set, as Irish dance tunes interact with music from around the world. The African-influenced material includes rousing instrumentals. Away from Africa, there are more surprises.

A key player in uniting the sound of the tracks is Rushed Eggleston on cello. A virtuoso musician, Rushed can tackle any genre with equal mastery. He switches seamlessly from classical (Bas Pelles / The Merry Widow) to wildness (Pull out the Stops / Rusheen Bay).

‘The Merry Widow’ is a re-working of the waltz from the operetta by the Austro-Hungarian composer Franz Lehár, first performed at the start of the last century.

Frenchie’s Reel comes from the New England/ Canadian border tradition and was learnt from Rodney Miller. However, the addition of 6 Shetland Fiddlers (recorded on Shetland when Sharon performed there), gives this track a unique twist. The sweet tone of these incredible players also gives a classical, orchestral feel.

Sea Shepherd features the incredible playing of Seckou Keita on the Kora (an Africa Harp). This is in a true African style but the playing again gives a classical, almost regal tone to the piece.

Alongside the instrumentals there are three, very different songs, There’s the Jim Reeves (and Elvis) hit He’ll Have to Go’, now featuring Finbar Furey.

Then there’s the stomping rockabilly/bluesy ‘Let’s Go’, which started out as an instrumental, but then acquired lyrics, thanks to an Australian based duo called ‘Hat Fitz and Cara’. Real Blues royalty was added to this song in Chicago in the shape of Greg Guy, son of the legendary Buddy Guy, on guitar. Harmonica was supplied by Majiec Zawarone. This track has the distinction of having been recorded and mixed in 5 different countries; Ireland, England, Australia, USA and Poland!

The third song comes out of the touring experience in New Mexico, where Sharon met Alyra Rose. The Machine is a song political in nature and a musical hybrid of hip hop and a traditional Irish style reel.

“ It’s this free-wheeling approach that makes Sharon Shannon so exciting. And she puts it all down to the time she spent working with The Waterboys, when there were “no rules as to the type of music played…we could move very easily from a punk song to an old timey American waltz to Irish jigs and reels and onto New Orleans-type blues”. As a soloist, she has continued that approach. Working with Denis Bovell on ‘Out The Gap’, back in 1994, she found that “the reggae rhythm lent a very groovy backing to an Irish reel”. Since then there have been excursions into Argentinian tango, Breton music, American folk and country, and much more besides – including, of course, that massively-successful collaboration with Steve Earle on ‘The Galway Girl’.

Sharon Shannon has had a remarkable and adventurous career. ‘Sacred Earth’ is a rousing reminder of why she is still so unique.”  Robin Denselow 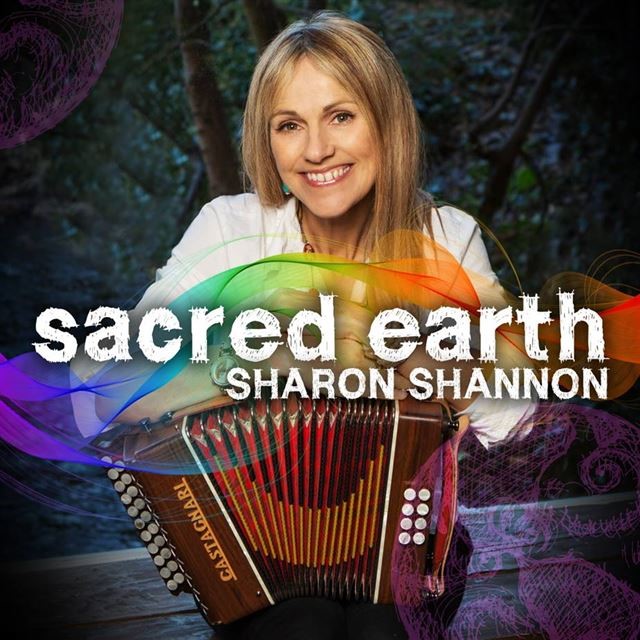