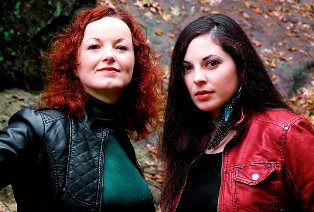 “Elysian Dreams” is an eclectic blend of world, classical, contemporary, Native American and Irish/Celtic Folk sounds. Two songs taken from the album were released earlier this year. “I will carry you” and “Dance with the River” met with rave reviews from live audiences and the broadcast community with both songs play-listed on radio. This incredible new album also features a narration by Choctaw elder, Gary White Deer.


SHISHONNAH, formed in 2010, is a merger of the talents of Irish artist Liz Madden and US artist Jenne Lennon—both accomplished musicians, performers and songwriters. They blend their Irish and American musical heritage with their Celtic and Native American traditions, creating their own distinctive and innovative sound.  Their original songs will take you to a place that defines the human experience and uplifts the soul.  With incredible vocal arrangements, their sound reflects a canvas as diverse as the lands of their upbringing. The album is as much an instrumental as vocal with the ladies playing piano, harp, bodhran, whistle, Native American flute, keyboards and percussion.

Madden and Lennon have performed and headlined individually in venues worldwide.  As SHISHONNAH, their most recent performance was with the world renowned Elgin Children’s Chorus in Chicago which received superlative reviews and ovations beyond all expectations.
They are currently finalising performance dates for 2012, which will include the United States, the U.K., Ireland, and Europe.