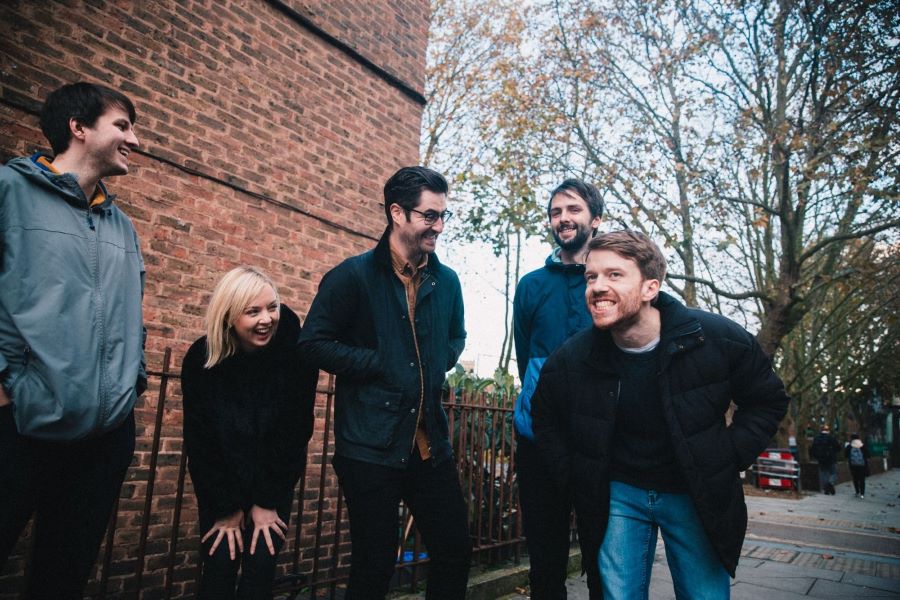 Dublin 5-piece Silverbacks are today sharing a video for new single ‘Up The Nurses’, the latest track to be taken from their anticipated debut album ‘Fad’, produced by Girl Band (Rough Trade) bassist Daniel Fox. Following swiftly on the heels of recent single ‘Dunkirk’ – which hit the BBC Radio 6 Music playlist, and won praise at BBC Radio 1 from Annie Mac (New Name) and Jack Saunders (Next Wave) – ‘Up The Nurses’ leans into their new wave influences, as bassist and vocalist Emma Hanlon explains: “I love Blondie and Kilian overheard me singing along to them one night. A few days later he surprised me with our very own new wave jam ‘Up The Nurses’.  The song talks about “amour fou” (“mad love”) and the unwanted adoration someone receives for the care they’re giving someone.”

Vocalist and guitarist Daniel O’Kelly continues about the video: “With everyone in isolation we set ourselves the challenge of building our own weird world. In the video two amateur radio enthusiasts help an astronaut return to his galaxy queen. We all had a basic tin foil spec and story to work from and everyone then shot their individual parts. It’s loosely inspired by Be Kind Rewind and their resourcefulness.”

The band have independently released a string of singles produced by Girl Band bassist Daniel Fox, beginning in 2018 with ‘Dunkirk’ and ‘Just In The Band’, each of which drew support on both sides of the Atlantic. 2019 saw the arrival of follow-up tracks ‘Pink Tide’, and then ‘Sirens’, which was part of a double A side 7-inch released with second single ‘Drool’ by UK independent label Nice Swan Records in January 2020. These single releases were backed by festival appearances at Simple Things, Swn, Eurosonic and Electric Picnic, headline shows in the UK and Ireland and supporting Girl Band on their sold-out UK tour dates.

Debut album ‘Fad’ represents the sound of a band trying to make sense of a noisy and disjointed world – one that competes for your attention at every turn. For them, it has come to be a symbol of what it feels like to try and absorb the world through both fleeting moments in front of screens, and prolonged obsessive periods filled with focus. They pull apart pop-culture in search of new meaning, whether it’s a nod to The Simpsons (“Fad 95”), imagining a lost John Hughes film (“Klub Silberrücken”), spiralling downwards into youtube deep-dives (“Pink Tide”), or making sense of youth culture through The Urban Dictionary (“Grinning At The Lid”). Much in the same way that modern life can be defined by its unpredictability, Silverbacks colourful, vivid and exuberant songs dismantle their source material and end up in places that you don’t think they will.

All over ‘Fad’ are the fingerprints of a band clawing their way through the remains of the day, seeing what there is to uncover.