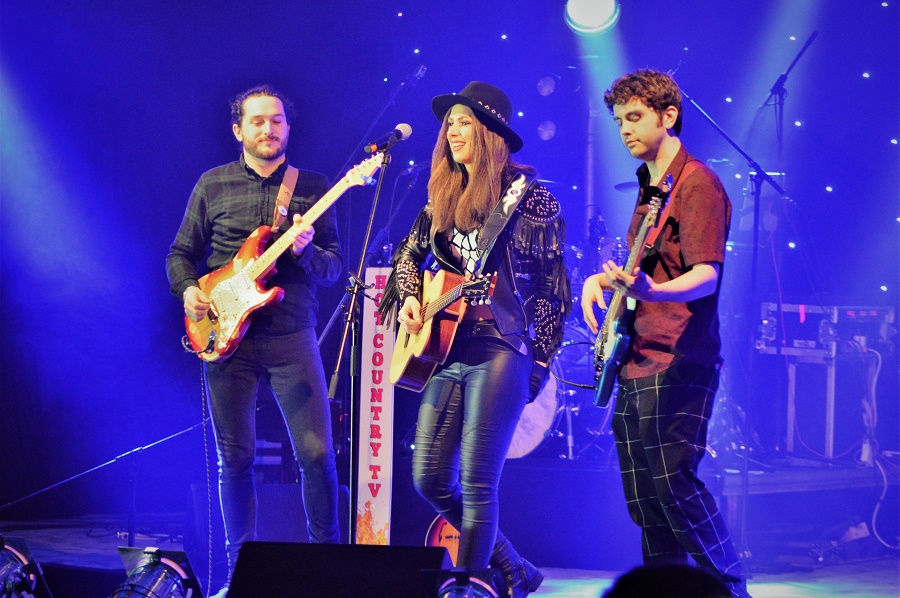 The local singer-songwriter, who was there accompanied by her manager Mike Gleeson, said: “We’re so incredibly happy and proud to receive this award. We’re working very hard to establish ourselves on the Irish Music scene and are so thankful for the support and recognition. A huge “thank you” goes to Hugh O’Brien and everyone involved, they are doing a fabulous job at promoting Irish Country music.“

The former BIMM student also performed two songs on the night, accompanied by Matt Wilson (3rd year bass student at BIMM) and Lee Murphy (lead guitar & mandolin) – her version of ‘These Boots Are Made for Walkin’ which to date has been played over 300 times on the Irish Radio and a very special version of ‘The Dutchman’ that will also feature on her soon to come Celtic & Irish folk album. The performance was televised and will be aired on “Hot Country TV” on the Keep It Country TV Channel soon (Sky 376, Freeview 87, Freesat 516).

Sina Theil is signed to Naas based record label Downda Road Productions and sponsored by ISS Recruitment & HR Services, and will be releasing her new single ‘East Bound And Down’ on the 8th of May on all major download services. The song is also the theme to Irelands’ Biggest Truck Show “Full of the Pipe 2019” which takes place at Punchestown, Naas, from the 7th-9th of June.

To date, Sina’s music has surpassed 6.25 Million Radio Listener Impressions and 2,300 radio plays in Ireland. Herself and her band will be performing at a series of festivals and gigs over the summer, including My Old Hometown Gurteen (4th of May), the Newbridge Junefest (14th of June), the Naas Wild Food Festival (5-8th of September), as well as other festivals to the likes of Cowboys & Heroes in Leitrim (1st of June), Bloom in the Park in Dublin (June 3rd), etc.