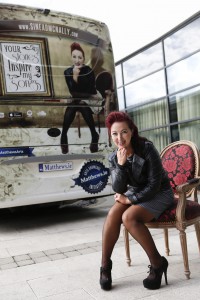 Dundalk singer/songwriter Sinéad McNally is delighted to announce that she is the performer and writer of the first ever company song for Matthews.ie and has secured a music licensing deal with the company. The song ‘Matthews Take You There’ was written when Managing Director Paddy Matthews decided that the company should celebrate their 20 years of service with a song that told their story.

Sinéad, who began building her career in the music industry in 2010 has already had great success with releases such as ‘Dance With Me’, ‘Moody Blues’ and many more radio friendly tracks. Her Christmas song ‘Nearly Christmas’ performed by the NCKids has also received worldwide recognition. Despite all her songwriting experience, she admits that she was quite nervous about writing a song to brief for such a big and successful company. Speaking about the experience Sinéad said “I genuinely wasn’t sure if I could pull it off. It actually scared me to be so deliberate in my writing processes. Not just in lyrical content that had to match the company ethos and standards, even their name had to be included, but also in musical direction, style, tempo etc whilst taking into account the target market and of course the company values and presentation.”

Sinéad was delighted to hear that the song ‘Matthews Take You There’ went down very well with management at the company and they offered to licence the song from her with a view to using it to build brand awareness and business for the company. The agreement, which runs on a two year basis, gives both parties a chance to review and assess the effectiveness of the song for the targets that have been set for it. Sinéad says that the music industry needs more of these types of collaborations and she believes that Matthews.ie have set an incredible example as to how businesses can utilise local or national artists in a way that benefits everyone involved.

To top it all off, Matthews.ie have also launched their innovative and exciting initiative known as #MatthewsArts, to help artists in Louth, Monaghan and East Meath get more recognition for their work by giving them a chance to win 6 months of free advertising on the back of a Matthews.ie coach. Launched by the Minister for Arts, Heritage and the Gaeltacht Heather Humphries and Minister for Business Gerald Nash, it has been described as “inspiring” and the “perfect blend of business to arts.” Sinéad is the first recipient of the advertising opportunity which features her 3.6 metre ad seen daily on some of the company’s 133 daily services between Dublin and the North East.