Sirkus Sirkuz, the new solo project from Decky Hedrock (The Japanese Popstars/Hedrock Valley Beats) has already been making waves and setting tongues wagging in 2012. With radio play across the UK, Ireland, USA and Europe, his signature electronic sound has interested the critics, the fans, as well as other artists. 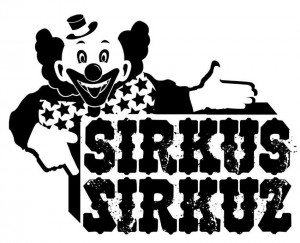 Over the years he has remixed artists like Beyonce, Depeche Mode, Ash, Groove Armada, James, Benny Benassi, Kylie and Gorillaz to name a few in his various ‘producer aliases’ and also collaborated with the likes of Robert Smith (The Cure), Jon Spencer (Blues Explosion), Morgan Kibby (M83), Green Velvet and James Vincent McMorrow.

Rapier, the first full release by 9G Records for Sirkus Sirkuz, and second appearance on the label, is a driving and gritty electro track, steeped deep in a four to the floor house beat and vocal. Sirkuz’s use of the ever growing rise throughout keeps the track elevated all the way to the end. Its already getting support and love from the likes of Crookers, Digitalism, Medicine 8 and more!

With each remix, the remix artist has taken the sound and energy into their own realm of their respective genre. Deadbots smash you in the face hard and fast with their synth stabs and nexus of electricity. Then, Figure of 8 chills the mood with a slower paced disco–‐inspired melody, including electric lounge piano. With Paul Jackson’s Electro Rub, the listener is returned to the early days of house music, including Casio inspired instruments. And finally, Dert Cheep brings us back to the warehouse, with a jumpy and bouncy melody to get everyone dancing.

This is the debut release from Sirkus Sirkuz and with more to come in the future, as his own live tour expands throughout the UK and Europe, eventually planning to hit the U.S. later this year. As well as some remixes coming out on Skint Records (home of Fatboy Slim) and Di Di Mau records in the next few months too.