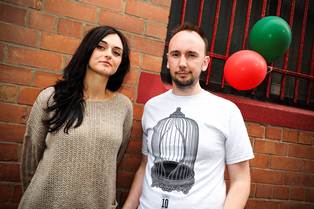 The shortlist is selected by an esteemed music-industry panel and ‘reflects the wealth of talent, innovation and creativity in the independent music sector’. At a time when the wider commercial sector is in decline due to internet piracy and illegal file sharing, the independent music sector has flourished as a result of innovative, digital marketing techniques and its commitment to the traditional ‘LP’ record format.
Smalltown America Records has distinguished itself with innovative digital and physical products over the last number of years. Among these is the formation of it’s own digital distribution company in 2011 [IndependentMusic.com] cited by Andrew Ferris, company founder as ‘our DIY iTunes’ and more recently, by publishing certain titles only on vinyl [as is the case with their current release ‘Public Service Broadcast 10’] for collectors and audiophiles alike.
‘Our aim is to be one of the largest, independent music businesses in the UK ’ states Ferris. ‘We are constantly trying to improve our customer experience and reward fans of our artists’ music with something extra special – this nomination is a fantastic boost for the artists and our staff and we’re all thrilled to bits. To be in the mix with my label heroes such as, Domino, Rough Trade, XL and Matador is a real credit to the team and all the bands on our label that travel thousands of miles to play shows all over the world’.
The label is credited with launching the careers of alternative Irish rock acts And So I Watch You From Afar, Fighting With Wire and LaFaro and is currently celebrating it’s tenth year in business. This is marked by the New Year release of a commemorative book and DVD to mark the anniversary, along with collector’s edition re-issues of its most celebrated titles. The label’s current release is ‘Easy Meat’ the sophomore album by Belfast-based rock quartet LaFaro – also recently nominated in the inaugural Northern Irish Music awards as ‘Best Band’.
[www.smalltownamerica.co.uk]
Jeff Robinson
Jeff Robinson PR
p. +44(0) 787 4862334
e. moc.rpnosniborffej@ofni
w. www.jeffrobinsonpr.com
Latest News