Songwriters in the Round announce April 9th details 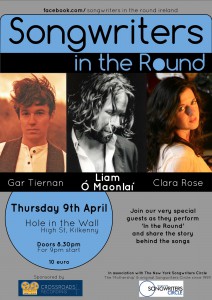 Each month the Songwriters in the Round audience have been going home with huge smiles on their faces after experiencing something quite unique for Kilkenny as three special guest songwriters perform ‘in the round’ and  share the story behind the songs.  Last month a packed house were glued to their seats as they heard the captivating stories and songs of Ed Romanoff, Eamonn O’Connor and Sean Millar. This Thursday 9th April there is another huge treat in store when Liam Ó Maonlaí, Clara Rose and Gar Tiernan take to the stage!

Clara Rose, “songstress of rockin’ blues, saviour of rootsy folk and with a voice that can make the hairs stand on the back of your neck” has been writing and performing her original music for 10 years. A featured artist on the 2013 album from Irish Blues Harmonica legend Don Baker, ‘My Songs, My Friends’, Clara Rose and Don Baker are currently on a nationwide tour alongside recording a full collaborative album together. Clara Rose has recently released her new E.P “Queen of the Late Night Radio”, recorded live with her 9 piece band.

Gar Tiernan is a songwriter who writes “wherever the song wants to take me”, from folk, pop, ballad, rhythm & blues all the way to acoustic hip-hop without ever losing his authenticity. He has been described as organic and “not like anyone else”, and his slow ballads and acoustic hip-hop stories have been hailed as lyrical genius by some of Ireland most accomplished artists. He has supported the likes of Damien Dempsey, Aslan and Hazel O` Connor and is currently recording his debut album

Join Songwriters in the Round’s very special guests and host Martin Bridgeman on Thursday 9th April at Hole in the Wall, High Street, Kilkenny. Doors open at 8.30pm for a 9pm start.  Tickets are 10 Euro on the door.