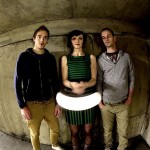 Swords have just released their first official music video for their track Chasm.

The video was directed by Sebastian Escalante who has previously shot live videos for Villagers, Mick Flannery, Wallis Bird, The Ambience Affair, The Man Whom, Halves and The Wiyos. This is Sebastian’s first official music video.

The video was independently produced and references the escapism element of Chasm’s lyrics and creates a violent story of tensions within the band caused by an oppressive and weird manager. It is inspired by some of the work of Stanley Kubrick.

You can check out Swords live in the coming weeks at the following venues: