T with the Maggies 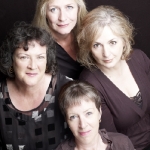 With experience born of years in the music industry and a willingness to check their egos at the door in order to reveal unexplored and untold possibilities – welcome Tríona Ní Dhomhnaill, Maighread Ní Dhomhnaill, Mairéad Ní Mhaonaigh and Moya Brennan – T WITH THE MAGGIES.
These true Celtic Women have plied their talents internationally for decades, achieving respect from their peers while picking up awards and commercial success along the way – not to mention the adoration of fans from all walks of life around the world.  Now they pool their unique collective talents in an album live shows which go beyond the sum of the parts.
Triona (Skara Brae, Bothy Band), Maighread (Skara Brae, Coolfin), Mairéad (Altan) and Moya (Clannad) all share a deeply embedded Donegal heritage, its language, musical traditions and the elemental beauty of their homes.
They originally came together for a one-off headlining show at 2009’s Temple Bar Tradfest, vowing to work more together. 2010 sees the fruition of the seed that was planted then.
In October 2010, they released their self titled album, T With The Maggies, with a launch in Odessa, Dame St. They have since appeared on The Late Late Show, and have performed together in Meenaleck and Ballybofey, Waterford and Galway.
Over Christmas, they will appear on the RTE Carol concert, TG4 Geantrai and will feature in a special RTE documentary on 27th December.
They play the Celtic Connections festival in Glasgow in January 2011.
www.twiththemaggies.com
Spotlight