Temple Bar lights the flame for Trad Night by Candlelight 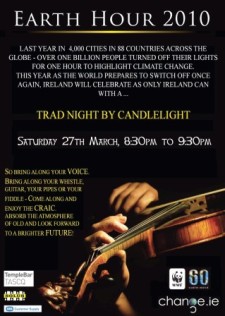 Last year 4,000 cities and towns in 88 countries across the world- the greatest mass participation event in history took place, when over one billion people turned off their lights for one hour to highlight climate change.  This year the Minister announced an new initiative – Trad Night by Candlelight – which will be a centre piece of this year's Earth Hour in Ireland where pubs and clubs throughout the country on March 27th will be asked to turn their lights off for at least an hour and celebrate Earth Hour in an uniquely Irish way with a traditional seisiún at 8.30pm.
At the reception the McVeigh sisters Roz, Joanne and Katherine performed a seisiún in one of Temple Bar's most established pubs, The Oliver St John Gogarty.
Speaking at the launch the Minister John Gormley said "At 8.30pm on March 28th, I'm hoping that people will not only turn off their lights for an hour. I hope people will make a decision to make a permanent change. The key message is that people make the difference at home, at work and at play and if sufficient numbers want to change their own attitudes and behaviour and lead more environmentally sustainable lives, then the challenge of climate change can be met together as a community and as a society." Minister Gormley pointed out that "there are Earth Hour picnics being organised in South Africa, pub quizzes in the UK and organic banquets in Australia, so I am delighted that Ireland will be marking Earth Hour in its own unique way with this trad night by candle light celebration." "Earth Hour is a symbol of the power we have to make a difference. Through one simple action, turning off our lights for one hour, we can deliver a powerful message about the need to reduce our carbon footprint and show the world that Ireland cares and wants to play its part in tackling climate change."
Every January Temple Bar plays host to the Temple Bar Trad Festival one of Irelands largest growing festivals which is organized by the Temple Bar Traders association TASCQ.  This festival which was voted best Trad Festival in 2008 & 2009 is programmed by RTE Radio presenter, Mr Kieran Hanrahan.
Temple Bar Traders today welcomed the initiative and already the following pubs in Temple Bar have confirmed that they will be taking part in Trad by Candlelight on the 27th March from 8.30pm – 9.30pm: The Auld Dubliner, Farringtons, Oliver St. John Gogartys, Vat House, Temple Bar Pub, Porter House, The Arlington, The Quays, The Morgan Hotel, The Foggy Dew and the Palace Bar.
For full details see www.visit-templebar.com or www.templebartrad.com
Latest News