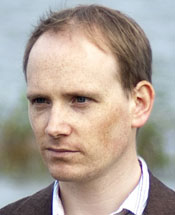 Works on the night include Simon Mawhinney – Flux from Reflux; Eduard Zatriqi – Selections from Ten Pieces for Piano; Ryan Molloy – Sliabh Geal gCua and a premiere of a new work by Simon Mawhinney Tirsogue

Simon Mawhinney is a composer/performer from Co. Down.  His work is regularly commissioned and performed by leading performers and ensembles throughout Europe.  Most recently he has written a sheaf of compositions for performers in Iceland, four of which were premiered in Reykjavik in June 2011.  He has a particular interest in works of longer duration and a recording of the 45-minute Hunshigo (for violin and piano) was released by Altarus Records in 2009.  In 2012 his most ambitious composition so far will be premiered in Belfast – a large-scale cycle of compositions for solo bass flute and computer. Simon Mawhinney’s repertoire as a pianist ranges from Elizabethan virginal music to the most contemporary works. In 2008-09 he celebrated Messiaen’s centenary with a series of performances of Vingt Regards, all of which received standing ovations.

From Pomeroy in Co. Tyrone, Ryan Molloy began his musical life on the fiddle. The piano soon followed in his teenage years and it is in this instrument that Ryan now specialises. Aside from international performance work, Ryan is currently studying for a PhD in composition with Simon Mawhinney at Queen’s University, Belfast. Ryan is also a performance tutor at Queen’s and an experienced peripatetic tutor. His recent compositions include Sætre Brygge for piano, Mise Éire for eight solo voices and a community music piece for a large ensemble. Ryan’s string quartet Third Epistle to Timothy was one of three winners of the West Cork Composition Competition 2010 and premiered in the West Cork Chamber Festival in June 2010. Ryan’s work attempts to bridge the divide between traditional Irish music and contemporary Irish music by incorporating elements of traditional music in his composition.

Eduard Zatriqi received a first class BMus degree (2009) and MA with distinction (2010) from QUB and is currently studying for a PhD in Music Composition under the supervision of Dr Simon Mawhinney. In 2010, the Ulster Orchestra workshopped the third movement of his Symphony. Furthermore, he was one of three selected winners of the West Cork Chamber Music Festival (2011) with his Piano Trio. Additionally, Eduard composes music for Spark Opera Company. To date, the company has performed his two chamber operas – Van Helsing: The Opera Exclamation Mark (2009) and The Monster in the Dark (2012). During the production of The Monster in the Dark, Eduard received guidance and advice from Judith Weir.

The CMC new music::new Ireland salon series aims to encourage newcomers and enthusiasts alike to engage with the music of Irish composers. Each performance takes place in an informal atmosphere with dialogue encouraged between composers, performers and audience. This is the Centre’s nineth series and salons will take place across the year on the last Wednesday of each month, apart from the summer months (June, July and August).

The Contemporary Music Centre is Ireland’s national archive and resource centre for new music. The Centre is supported by the Arts Council/An Chomhairle Ealaíon.  The Centre would like to thank the National Concert Hall for the use of the Kevin Barry Room for the salon series.