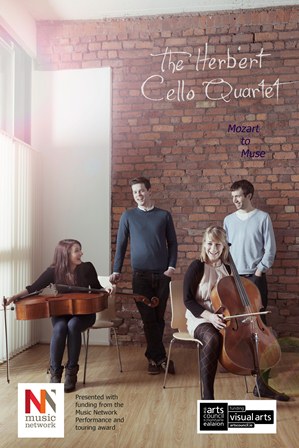 Presented with funding from the Music Network Performance and touring award

The Herbert Quartet is formed of four Irish cellists Ben Cashell, Peggy Nolan, Aoife Dennedy and Paul Grennan who studied at the Royal Northern College of Music in Manchester. They had first met when they were very young at the Royal Irish Academy of Music in Dublin, they started to play together in the prestigious RNCM cello ensemble where they were inspired to set up their own cello quartet.

Their members have performed extensively around England and Ireland in venues such as The Wigmore Hall, Royal Festival Hall and the National Concert Hall of Ireland. Two are currently working with the Halle and BBC Philharmonic Orchestras. Their careers are very diverse :Ben has played with Mercury award nominees Eveything Everything, Paul is heading off on a European tour with the Icelandic musician Olafur Arnalds, Peg plays in the award winning period string Quartet, The Borromini, and Aoife is involved with outreach teaching in Dublin. This diversity of careers has helped influence their musical programming, which ranges from Rossini, The Cinematic Orchestra, Fitzenhagen and a newly commissioned piece by the Irish composer Michael Doherty.

They are embarking on their first tour of Ireland with funding from the Music Networks Performance and touring award. They will be playing at a mixture of venues that mirror the music they will be performing: a combination of new and old; Muse to Mozart and from Block T in Smithfield to Calary Church in Wicklow.

They will also be giving workshops at three of their old primary schools. Where they hope to share their love for the varied repertoire of the cello, and inspire the next generation of Irish Cellists

Presented with funding from the Music Network Performance and touring award Calary Church,