The debut solo piano album by one of Ireland’s leading film composers, ‘The Promenade’ was recorded on an old upright piano using vintage microphones. The theme of the music is that of a promenade and the character and charm of an upright piano is celebrated on an album of 13 simple, tuneful piano pieces. The Irish Arts Council supported the omposition of this project with a Music Bursary Award. 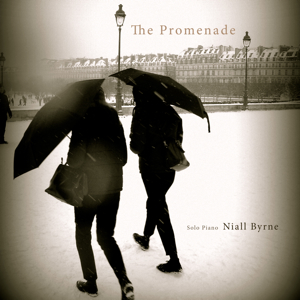 Niall studied Piano and Composition at the Royal Irish Academy of Music. He was awarded first prize at the 1992 Dublin Film Festival’s music competition, chaired by composer Michael Nyman. Since then he has composed music for feature films and television dramas both in Ireland and abroad. In 2011 he scored the classic Irish sIlent film ‘Guests of the Nation’ for full orchestra.

The score has been performed to sold out concerts and rave reviews in Dublin (National Concert Hall), New York (Alice Tully Hall, Lincoln Center) and London (The Barbican). He has received several IFTA (Irish Film and Television Award) nominations and won an IFTA for Best Original Score this year for his score to the BBC film ‘Loving Miss Hatto’