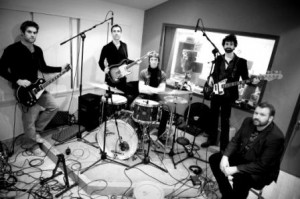 “Panic Slowly” is the new album by The Shoos. “Panic Slowly” has become a saying within the band about how to live day to day as a band who want to make a mark on the lives of those who listen whilst trying to retain their sanity.

The Shoos went in to record a live EP with no intention of recording an album……recording live was something they never did before and the result was simply that the band will never record any other way. “We kept recording and looking at each other in disbelief that it was working out so well so we kept the red light on until we had 10 tracks”.  A couple of tambourine overdubs and a D minor on the piano and that was that.

“There’s no point in describing the music only to say that the subject matter on the album is mostly taken from the band’s personal experiences and deals with the barriers we put up, the fact that we are turning into our Dad’s, the unrealistic expectations we have, the disappointments we feel,  and the incredible feeling of making music.”

Through Facebook The Shoos asked fans to contribute a picture of their lips. They got nearly 4000 lips and the best ones made it on to the cover.

The first single off the album “Say Something” (mixed by Joe Zook  – One Republic, Katy Perry etc) documents the story of the band’s investors and how the move to LA fell through. It was chosen by UTV to launch their “Select Irish” initiative across their Irish stations with play on prime time radio bringing in an influx of new fans.

The album Panic Slowly will be launched in Whelans on Fri the 7th of September.

“The Shoos blend all the key elements of arena and classic rock, fashioning it into a potent and dynamic vehicle for their hook laden tunes.”