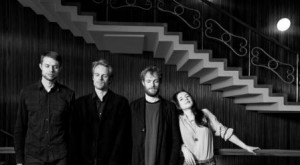 The Unusual History of Ether is the songwriting partnership of Irish singer-songwriter Rebecca Collins and Danish guitarist Mikkel Ploug. The two met several years ago when they played together at the Dublin Fringe Festival and immediately forged a musical connection. However, busy touring in Europe and the UK with their solo projects, it wasn’t until 2011 that they found the time to collaborate. After a few months of swapping musical ideas online, The Unusual History of Ether was formed and Rebecca relocated to Copenhagen.

Adding to the wide range of influences Rebecca and Mikkel bring to their writing style, bassist Jeppe Skovbakke (of I Got You On Tape) and drummer Jeppe Gram (Grammofunch) completed the band’s line-up during the recording of their first EP, “Part One”.

After several months of extensive live performance, The Unusual History of Ether returned to the studio in July to record their debut album, which is due out in early 2013. They will be touring Ireland, the UK and Denmark in support of the first single from the record in October and November 2012.