Trad for Trócaire | Battle of the Bands Competition

If you’re in an established band, a group of friends who play together regularly or an emerging 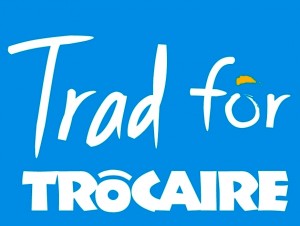 talent waiting to be discovered, Trad for Trócaire want to hear from you.  This is your chance to play at the two biggest trad events in the world! At the same time you’ll be raising awareness for Trad for Trócaire, a campaign that brings the Irish traditional music community together to raise money for Trócaire projects around the world.

Battle of the Bands

The Battle of the Bands competition is part of Trad for Trócaire and helps raise awareness for this campaign. Trad for Trócaire motivates people to organise local trad sessions in aid of Trócaire’s work worldwide. All funds raised are channeled into supporting communities living in extreme poverty, helping them to build a better future for themselves.

The winning band will:

• Perform live on the Gig Rig in Derry at Fleadh Cheoil na hÉireann.

• Perform live as the opening act for a major band during the Temple Bar Trad Fest 2014.

Battle of the Bands entry details:

1. Competitors must be 16 years or older.

2. Bands must have a minimum number of 5 members.

4. Music should be predominantly traditional Irish but may contain other

together with contact details should be sent to Kieran Hanrahan, Clasac,

6. a) Recordings will be assessed by a panel of adjudicators.

b) Adjudicators decision will be final.

c) Demo recordings will not be returned.

7. The finals will be held at Fleadh Cheoil na hÉireann, Derry 2013.