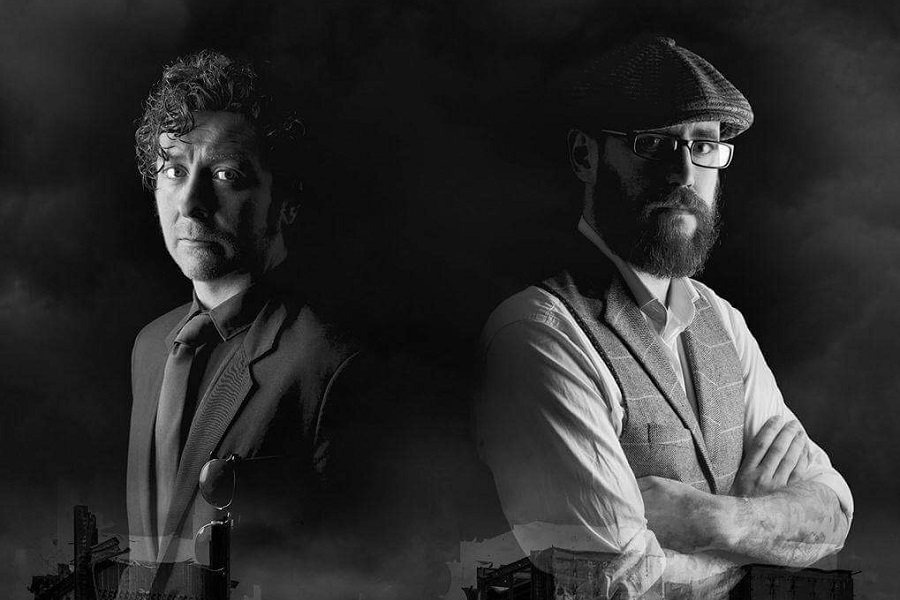 Yes, the Tragedy of Dr Hannigan. The tragedy in question being this poor individuals very existence being the manufactured monster of two evil genius morons. You see, Dr Hannigan is the love child of one Mr Tony Wright & one Mr Dean Stevens.

Mr Tony Wright, known to the Police (Sting etc) as VerseChorusVerse, is the founding ex member of ASIWYFA. He downed his instrumental chops some years ago now and dived headfirst into songcraft & penning ill advised band bios. His last release was 2015s, Say & Do, which charted at Number 1 on Amazon & Number 19 on the UK album charts. How? We’ll never know. Somehow this idiot has a book to be published soon too. Wonders never cease.

Mr Dean Stevens, evil genius producer & multi-instrumentalist mangler, known to Sting & his mates occasionally as Deany Darko, is the other maniacal yet willing contributor to this musical maelstrom. He is the slider/fader pusher mastermind behind capturing the gargantuan talents of acts as diverse as Thomas Leeb to Sabrejets, amongst many others.

The Tragedy of Dr Hannigan is their warning to the larger world. What is the one thing that one should do with a Tragedy? Why, to learn from it of course.

Don’t do as these malevolent snake oil salesman have done to the embattled and poor lost soul of the tragic Dr Hannigan. Sacrificed to save their own souls through his own creation.

But oh my, do they know how to jam.

If not for you, for The Tragedy of Dr Hannigan

Their debut album, “Fawkes Ache”, is released digitally worldwide on 24/10/17 through Kobalt Music with a full band album launch at the Belfast Empire on 8/11/17.

“Traipsing a tightrope between Alabama 3, Tom Waits & Grinderman; this is not music for those of a nervous disposition. This is music to get arrested to, music to ask forgiveness to… this is The Tragedy of Dr Hannigan” Phil Taggart, BBC Radio 1
“Meaty, beaty, big & bouncy; this is blues power with a proper Rock n Roll heart…Epic” Ralph McLean, BBC
“The Tragedy of Dr Hannigan will certainly grab your attention…the latest guise of Tony Wright; watching his career unfold is fascinating. Constantly evolving and experimenting; long may this continue” Dan Hegarty, RTE
“Character driven tunes…darkness with a wry smile…extremely hooky” Stephen McCauley, BBC
“Great track…I can see Big Bird dancing to it!” Tim Wheeler, Ash