Trio of acts for Bello Bar this weekend

This Saturday sees three acts perform in Bello Bar (under the Lower Deck, 1 Portobello Harbour, Dublin 8). Doors open at 8:00pm and tickets are €8 and can be purchased here: https://www.ticketea.ie/exploding-eyes/ 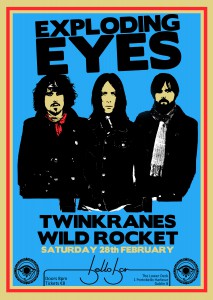 are a heavy Psych Rock Power Trio based in Dublin, Ireland. The band comprise of Brian Gallagher on drums (Humanzi, The Mighty Stef), Robbie Brady on bass/vocals/theremin (The Things, Cheap Freaks) and Al Dodd on guitar/vocals (Cheap Freaks, DC Pakt). Their sound draws influence from the likes Cream, John Mayall, Eno, Kim Fowley and the UK underground psych scene of the 60s and 70s, such as Deviants, Pink Fairies and Andromeda. In their short time together they have released one single ‘I Panic’ to much critical praise and built a reputation as one of the best live bands on the local circuit. They are currently working on their yet to be titled debut LP with Detroit producer Jim Diamond (White Stripes, Dirtbombs) which is slated for release late 2015.

TWINKRANES are an experimental Rock band from Dublin. The group was formed in Dublin in 2007. In 2008 the group came to the attention of Andy Votel (Finders Keepers Records) who expressed a keen interest in releasing the groups music through the label, a touring single “Fizz Nor Feedback” followed which was well received & would become the precursor to the critically acclaimed Debut album “Spektrum Theatre Snakes”. In 2009 the album “Spektrum Theatre Snakes” was released the album melded the worlds of Motor driven kraut, Space-rock, Avant pop, Psychedelic & Drone. NME hailed the album as incredible and awarded the album a 9/10. 2014 saw the release of a split 7” vinyl with Dublin post rockers Halves while the majority of the year has seen the group holed up at their studio in Dublin. Currently working as a trio 2014 has seen the group filter and re-imagine TWINKRANES impenetrable electronic Rhythms, experimental soundscapes and drones at their home in Black Pitts with a view to releasing new music in 2015.

WILD ROCKET plays space metal. WILD ROCKET plays heavy psychedelic punk. WILD ROCKET endures. WILD ROCKET lives. The band was formed in the past and continues to exist through the present and into the future. The band is located in Dublin, Ireland and consists of men from across the landmass. These men; Cian, Niall Jon and John have a vast combined knowledge of music, all having performed with many other bands in the past and present. Within the band there is percussion, a machine for creating synthetic sounds and two flavours of stringed instruments, one high one low. Having successfully released their debut album GEOMAGNETIC HALLUCINATIONS in 2014 the band continues into 2015 with more live shows and recordings set to expand even more consciousnesses into eternity.