Undiscovered Artists Given Chance To Score A Movie Soundtrack 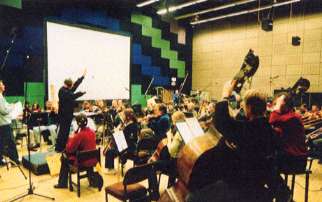 Music video site MUZU.tv is offering musicians from all over the world the chance to be a part of film history.  Launching today, Soundtraxs is the first-ever competition that gives independent music artists the opportunity to create the soundtrack for a major motion picture.
Soundtraxs is the brainchild of British independent production company NyAC and will see entrants compete online for their music to feature on the soundtrack of the hotly-anticipated new film Relative Desire by BAFTA award-winning director Michael Baig Clifford, starring Imogen Poots (Fright Night, 28 Weeks Later, V for Vendetta) and Harry Treadaway (Fish Tank, Control, Brothers of the Head).
Entrants simply download any of the movie scenes available on http://www.MUZU.tv/Soundtraxs, sync the video with an original music track and upload to MUZU.tv. The competition is free to enter and the top 50 tunes (ranked by the public according to the number of views on MUZU.tv, ratings and comments, tweets on Twitter and plays on social networks such as
Facebook) will then be considered by an expert panel who will choose the final 10 tracks to appear in the film. Winners will also:
• Re-record their track in a professional studio
• Receive a sync fee covering use of their music in the movie, Relative
Desire
• Receive revenue from the movie soundtrack album
“Soundtraxs is a world first. It’s a fantastic opportunity for artists of all levels and genres to get their music heard on one of the biggest stages possible. A movie soundtrack is usually the preserve of established artists only, but this project is helping to break down those barriers. In addition, by simply entering the competition and uploading their music to MUZU, artists have the potential to make some money from their recordings too" – Ciaran Bollard, C.E.O and co-founder of MUZU

Soundtraxs Judges
Michael Baig Clifford
Michael first attracted attention with his BAFTA nominated short ‘Bouncer’ starring Ray Winston, which was quickly followed by his Bafta winner ‘Brown Paper Bag’ ,written by award winning writer Geoff Thompson. He won his second BAFTA for ‘Think About it’ and an RTS award for his work in television where he has directed documentaries and several episodes of 'Doctors'.  Relative Desire is his first feature film.
Ian Seymour
Ian began on award winning film drama like Four Weddings, Secrets and Lies and Donnie Brasco, where he learnt his craft working with some of the industry’s most distinguished and successful directors. Editing in his own right for some years now, Ian is increasingly busy in the UK, the US and South Africa.  Recent credits include BAFTA winning 'In Bruges'; and The Proposition staring Ray Winston.
Hywell Evans
Competition Entry
To enter, users must visit http://www.MUZU.tv/Soundtraxs and download any of the movie scenes provided.  The clips can be downloaded by right-clicking and hitting ‘Save As’ whilst watching any of the scenes. To sync the entry track with the video, entrants can use free packages such as 'Windows Movie Maker' for PC and 'iMovie' for Mac. Entries can be uploaded by clicking 'Enter Now' on the Soundtraxs homepage.
The competition’s Terms and Conditions can be found here:
http://www.muzu.tv/terms/competitionTerms?variant=soundtraxs
Latest News
ADD TO MQ