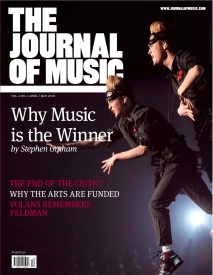 
The Journal of Music, a bimonthly music magazine published in Ireland, has won the 2010 Utne Independent Press Award for Arts Coverage.
The Utne awards in the USA, now in their twenty-first year, survey over 1,300 independent magazines from all around the world. At an awards ceremony in Washington DC on Sunday, 25 April,The Journal of Musicbecame the first Irish magazine to win the award.
In choosingThe Journal of Music, the judges said: "The Journal of Musicstands well apart from the pack in the music press, both because its published in Ireland and because it covers such a wide range of music in its pages, from classical and folk to pop and jazz. In articles written by musicians but meant for all, this magazine brings to life the craftsmanship, artistry and passion-stirring powers of music."
Commenting on the award, Editor Toner Quinn said: "Our aim was to create a new type of music magazine for international readers, one that provided the bigger picture on musical life across genres. It is a great honour for the magazine to be recognised by the Utne awards, which have consistently highlighted the best alternative publications from around the world."
The Journal of Music, which has been supported by the Arts Council since it was founded, now has readers in twenty-three countries.
Over the past year The Journal of Musichas published contributions from composer Bill Whelan, choral conductor Paul Hillier, poet and novelist Ciaran Carson and US minimalist composer Tom Johnson.
The magazine's staff of four is based in Galway, Dublin and Berlin. Edited by musician Toner Quinn (Galway), the Art Director is Simon O'Connor (Dublin), the magazine's Deputy Editor is composer Benedict Schlepper-Connolly (Berlin), and the website developer is Simon Doyle (Dublin).
The Journal of Musicwebsite:http://www.journalofmusic.com
Latest News