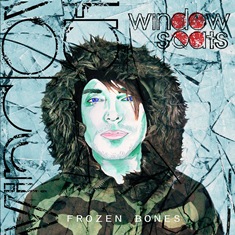 ‘Frozen Bones’ is the debut EP from Belfast band, Window Seats. Mixed and mastered by Neal Calderwood (Jody Has A Hitlist, The Answer, General Fiasco, Fighting With Wire), it will be released on 2nd December 2011.

The EP features the singles ‘Rat’ and ‘Local Superhero’ and arrives on the back of their highly acclaimed music video for ‘Local Superhero’, which has been nominated for Best Production Effects at the Irish Music Television Awards 2011.
On 2nd December the band will begin a tour in support of the release, starting with a Belfast launch at Animal Disco club, Auntie Annie's. Up-to-date information and access to music and videos at windowseatsofficial.com.

Press
‘Local Superhero’ single review
“…a Foo Fighters-sized guitar anthem, only with an almighty Belfast drawl behind it… for the love of all things wild and noisy, don’t let it pass you by.”
– Celina Murphy, Hot Press
‘Rat’ single review
“…an intriguingly hard-hitting combination of heavy guitar crunch and poppy jangle…”
– David Roy, The Irish News