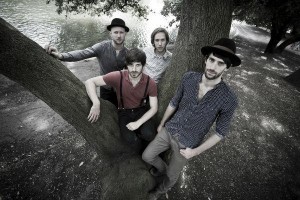 After a successful Irish Album Launch Tour earlier this year for their debut album “The Sadness of Remembering”, followed by a summer of festival appearances throughout the UK, Yngve & the Innocent have just embarked on an Album Launch Tour in Germany. “The Sadness of Remembering”, which was recorded live in London’s Soup Studios, has just been released in Germany on Tonetoaster Records.

Brothers Yngve and Demian Wieland form the backbone of Yngve & The Innocent, a band which through various lineup changes has moved from Sligo on the west coast of Ireland via Dublin to London where they’ve been based for the past 4 years. Regularly returning to Ireland they have been averaging over 100 shows a year and have had a succession of breakthroughs including UK national airplay on BBC Radio 2 by Steve Lemacq. Their festival appearances this year have included the Green Man Festival in Wales and Bestival on the Isle of Wight.

You can keep up to date with all Yngve & The Innocent’s live dates at their website here: www.spacetobeyourself.com