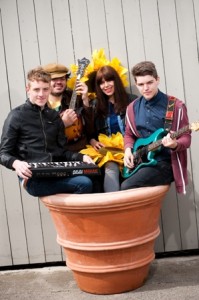 If you like music and you have yet to hear of youbloom, prepare to be thrilled by the following information. youbloom is a fresh  coalition of international artists and music lovers designed to help new talent develop and prosper. And this summer from Friday 28th to Sunday 30th June 2013, youbloom is coming to Dublin’s fair city to bring you no less than 50 of the best  ‘brave new music’ artists from all over the world, along with 50 local ‘brave new music’ acts who will be flying the flag for Ireland.

youbloom@Dublin shareholder Bob Geldof is absolutely thrilled that youbloom is taking place in his home town. “youbloom@Dublin is an amazing opportunity for independent bands/artists and has the potential to become Dublin’s SouthbySouthWest” – Bob Geldof

The 100 multi-cultural and multi-genre artists have been chosen from the youbloom international platform by its A&R team which is headed up by Lindsay Reade (Factory Records – Joy Division, New Order, Happy Mondays, 52nd Street), legendary A&R man Nigel Grainge (Thin Lizzy, 10cc, The Boomtown Rats, Sinead O’Connor, World Party, The Waterboys, The Steve Miller Band) and 6 members of the youbloom team in Ireland, the UK, EU and US.

Artists will be travelling from all corners of the world to play in Ireland’s bustling capital this June 2013! You can expect to see performances from 14 different countries including the US, UK, Denmark, Norway, Germany, France, Spain, Gibraltar, Israel, Canada, Brazil, South Africa, Austria and Switzerland. The bands will be performing in five of Dublin’s best venues over the weekend, namely the Mercantile, Odessa, Workman’s Club, Grand Social and Twisted Pepper. On each night, in each venue, there will be a distinct musical flavour, be it electro, reggae, soul, jazz, metal, indie, rock or a clever cocktail of them all. There will be something to please everyone’s tastes so be sure to slink your way into each venue to get a great spot for the live acts!

youbloom is a development programme created for unsigned artists, and for both live and online discoveries. The programme is driven by a love of new music, a desire to give back to the community and to support the emerging artists of tomorrow. It is a community of fans, promoters and artists that have a single overriding interest – the promotion of new artists and their music.

In order to ensure the coalitions growth and implementation in Dublin this year youbloom will be supported by Dublin City BID (Business Improvement District) under its Dublin Town.ie programme.

“youbloom is evolving into a cross between a grassroots new music Live Nation and a music industry LinkedIn” stated youbloom founder and CEO, Phil Harrington. What started with a focus on new artists competing for fan votes in the youbloom Music Awards in 2010, is now growing into a global network of live events and annual festivals, (delivered by a network of local promoters under the youbloom brand), all connected through the youbloom.com website. youbloom.com provides a platform for fans to discover new artists, where they have the tools to create relevance for the artists they love and would like to see live.

A part of this youbloom@Dublin weekend is also to nurture this emerging new talent. With this in mind youbloom is hosting  a music conference to be held in the College of Surgeons on Saturday 29th & Sunday 30th which is open to any musicians and members of the public wishing to attend. The conference will include panels, speed sessions and roundtables with panelists. Roundtables will focus on songwriting, performance, social media, demo creation, and international marketplaces.

Tickets are priced €15 for a night ticket €35 for weekend tickets & €75 for full delegate passes, all tickets available from www.entertainment.ie