youbloom, the global music event is returning to Dublin this Summer.

Now in its sixth year, youbloomDublin thrills fans and the music industry with aspiring artists getting the opportunity to play showcase gigs with free of charge access to the youbloom Music Summit.

The youbloomDublin 2018 Music Summit which is open to everyone, is an industry conference offering emerging talent the chance to network and learn from top level music connections and experts. Taking place in IMRO HQ on June 2nd, (IMRO is also a sponsor of youbloomDublin18) industry knowledge on sync, legals, songwriting and Spotify will be some of the subjects covered in this one day conference including: Keynote, “A Sea of Gray Hats – How to Use the System to Change the System” by LA industry legend Ted Cohen. Panel: (4 total) “How To Write A Hit – Inspiration or Perspiration” led by Steve Lindsey of Elevate Music and Masterclasses (3 total), “How to Get the Most Out of Spotify” by Peter Astedt and “Managing your career in the 21st century music industry” with Pete Holidai. Full Summit details.

youbloom’s focus on original organic artists has led to a blossoming partnership with the team at Bloom in the Phoenix Park. Last year over 120,000 people graced the gates of the Phoenix Park, enjoying the best in homegrown food, drink and culture.

Stunning performances from Aine Cahill, David Keenan in 2016, uplifting pop from Lavengro in 2017 and well loved band The 4 of Us will give you a hint at the type of talent we put on the main music stage at Bloom. This year feisty folksters Corner Boy and the inimitable duo Don Baker and Rob Strong will sparkle in the sonic sunshine on the main stage in the Phoenix Park. We also have a host of unsigned talent just waiting to be discovered.

Meanwhile, in the city centre, youbloom brings over 60 artists to the stage. Free gigs will take place in The Underground, JT Pimms, The Mercantile and Berlin D2. Artists have traveled from across the globe to perform over the June bank holiday including Tanjier – Concreto (Brazil), D-Day, (Ireland) – Danu5ik (England), Katie Gallagher (Ireland), Georgia & The Vintage Youth (England), The Finns (Ireland), Emmanuel Nwamadi (England), Luke Clerkin (Ireland) and BoW (Austria). Here’s a little bit about youbloom including youbloomDublin and LA festivals since 2010. 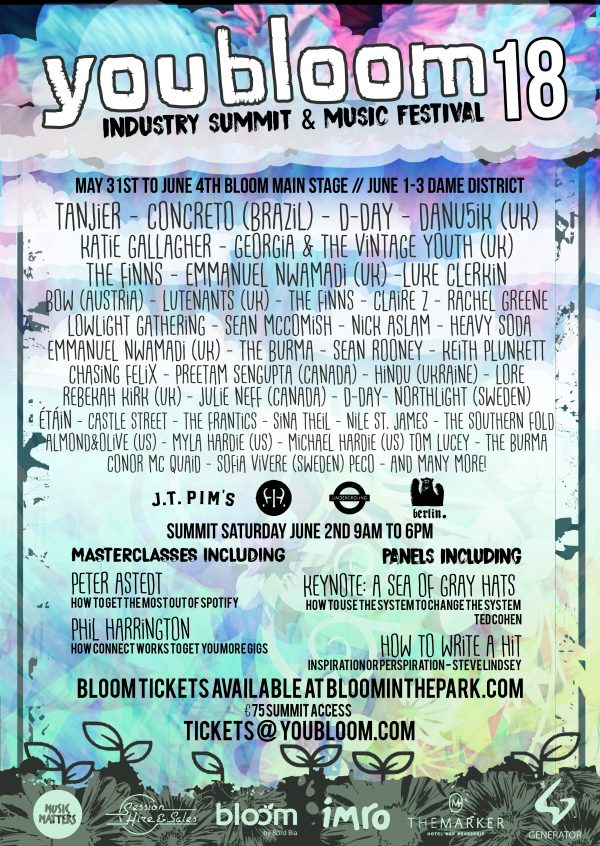