IMRO at Other Voices 2018/IMRO Other Room Reviews 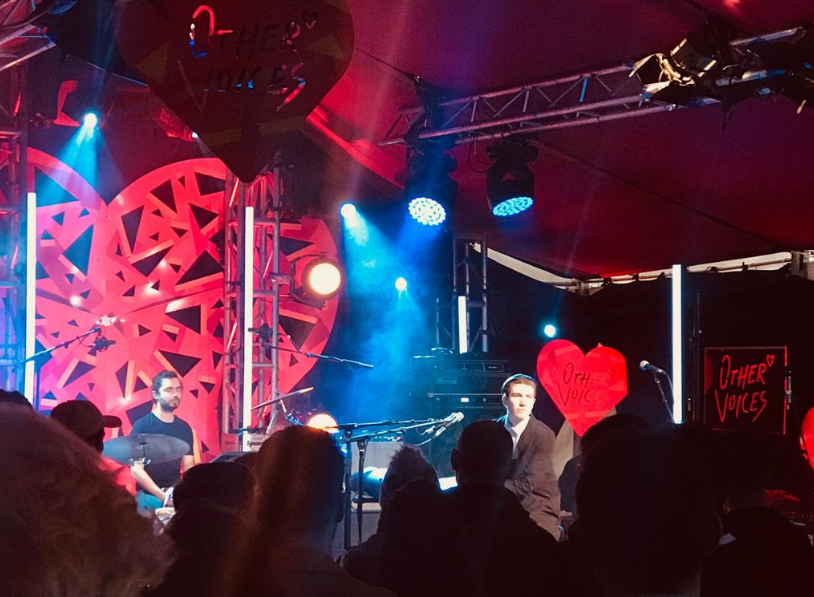 This year five music acts performed at An Chonair Bar, as part of the IMRO Other Room at Other Voices. Tony Clayton-Lea was there to review all of them.

I HAVE A TRIBE

Patrick O’Laoghaire has a knack – a very quiet knack, it must be said, but a knack nonetheless – to mine emotions from the most basic of instruments, notably his tranquil voice and minimalist keyboards. Under the umbrella title of I Have A Tribe he released his debut album, Beneath A Yellow Moon, two years ago, and has since aimed to maintain awareness in his music without any serious level of radio play. As any musician knows, life isn’t a bowl of cherries, but people like O’Laoghaire soldier on because he knows full well that what he does has worth. This is proven song after song during his set  – there is a gentleness to his music that belies its strengths. Even a fragile version of Amy Winehouse’s Back To Black manages to pinpoint what is really special about this guy: his vulnerability is his armour, and it fits him, protects him, like a glove.

The winners of the 2FM Listeners Choice for the IMRO Other Room may have yet to master the art of working a room as they stand around after a soundcheck, waiting for certain things to happen, but that Oscar Wilde maxim of youth being wasted on the young is nonsense when it comes to PowPig. The Limerick group (whose Twitter bio amusingly states that they are ‘a 14-piece boy band from Sligo’) haven’t been around too long either in years (they heard the news of their slot on the Other Room line-up when they were at school) or as a music unit. Not to worry – as is the case these days with pesky kids they display a maturity and skill set far beyond their age. You could argue that for a group of their experience they are still a work in progress (aren’t we all?), but what seems indisputable here is the potential.

Recent winner of the NI Music Prize for Best Single (for Human), Belfast’s Kitt Philippa is the kind of singer-songwriter that casts an observational eye over all she sees. Over the past few years, she has developed in such a way that she has deservedly taken those several important steps up the ladder. Judging by her elegant performance in the IMRO Room it seems obvious that the way forward is just to keep on doing what she has done for the past while. Performing with just drums and piano – the latter played with virtuosic levels of skill, which is not surprising as she is classically trained, the former astutely understated – Philippa delivers a sequence of softly-softly tunes that perfectly complement the mid-afternoon vibe. She also looks the part, dressed down in black and white, and with her hair slicked back. It is an overall smart and sharp demeanour that is as compelling as the music is complete and calming.

Sometimes all your simple needs are taken care of by a band that knows how to solve complex problems. Columbia Mills are one such. They released their debut album, A Safe Distance To Watch, last year (“layered tunes that leave an indelible imprint”, noted the Irish Times review), and it hit the spots that so many other album didn’t by virtue of music that was influenced by classic post-punk greats as well as more contemporary acts. Influence, of course, is one thing, but they’re not worth a damn if you don’t know how to make something different out of them. This is where Columbia Mills come up with the goods. Despite a sound problem that is more apparent onstage than for those in the audience, the music sounds just fine. It is urgent, it is forceful, it is often eyes-closed beautiful.

‘Eyes-closed beautiful’ might not be the right way to describe Dublin hip hop duo Mango & Mathman, but if you’re looking for the kind of rhythms that shake the bones from tip to toe and back again, then you won’t go wrong with Karl Mangan and Adam Fogarty. The previous night in the same venue, the pair almost blew the roof off with a frantic performance that perfectly caught the mood of Dingle’s merry midnight ramblers. A Mango & Mathman late afternoon performance the next day may not have had the same effect, but there was still enough bouncy energy on display to make people forget the time and vibe them up for the evening ahead.

And then it was over. Another year of the IMRO Room at Other Voices comes to an end. It was exciting, original, emotional, heart warming, and enlightening. Next stop? 2019…