The Lost Brothers and their distinctive vision 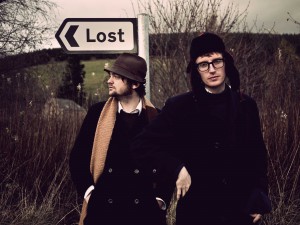 The Lost Brothers are Mark McCausland, and Oisin Leech, and their distinctive vision of folk, country, and blues has radiated across their four albums, including this year’s brilliant New Songs of Dawn and Dust, which was produced by Bill-Ryder Jones in Liverpool. They played St. James’s Church, as well as the Music Trail in An Diseart as part of Other Voices 2014.

–“Dingle is like Liverpool. It’s a town made of song with a big energy running through it. It always feels like we have had a about 90 coffees when we get to Dingle. We feel like either writing a song or climbing the nearest mountain.

Coming to do Other Voices was the perfect end to what has been a very lucky year for us. Many of the recent tour dates sold out, and just when we are nearly home we get the news that Other Voices love the new album and want us in Dingle. What an honour! Mark is from Omagh and I’m from Navan so it feels like we have come to some far distant magical town when we arrive in Dingle. Every footstep feels right.

It’s strange but Dingle is a home for us. We always go there at the beginning and ending of chapters in the “Losties” stories .

We usually gig as a duo but for Other Voices we decided to invite our pals Steve Wickham and Colm Mac Con Iomaire along to try present our new songs in a different way, and take a risk with the gig. The two lads are like lighthouses for us. Very inspiring people who we see on our travels .

On the last night of Other Voices when all the work was done Mark and I went down to the harbour and had an end of tour aperitif in an empty pub. A big fire was burning and we just sat there in total silence staring into the flames for two hours trying to take the whole Other Voices experience in.

Then we went back to Benners and danced til dawn.” – Oisin Leech