The Irish Music Rights Organisation (IMRO) is delighted to announce the fourth IMRO Live Music Venue of the Year Awards will take place on Tuesday February 28th, 2012 at IMRO Buildings in Dublin. 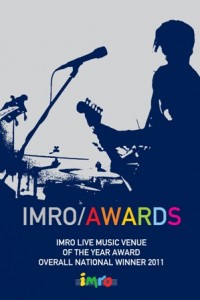 es, who provide the public with an exceptional live music experience week in, week out. Hundreds of venues across the country were considered for the Awards shortlist by more than 8,000 IMRO members. Venues were judged on their commitment to providing the core elements that make for a great live music venue – atmosphere, sound and lighting, staging, diversity of programming and most importantly, the staff and management at each venue. IMRO members also voted on Ireland’s music festivals, delivering a shortlist of ten festivals in the final tally.

Live music venues and festivals play a pivotal role in the music industry in Ireland, giving international and home-grown artists a platform to engage with fans and build new audiences. They also play a central role in urban and rural communities across the country, providing a social gathering place for audiences of all ages and musical tastes and contributing hugely to the domestic economy. Of the Awards announcement, Victor Finn CEO of IMRO said: “An extensive and vibrant venue network is the lifeblood of any strong live music sector. These awards acknowledge and applaud those venues and festivals throughout Ireland that excel in creating a memorable and exhilarating environment for music fans and performers alike”.

At the ceremony in IMRO HQ in Dublin on February 28th, awards will be presented to the leading live music venue in each of the following regions: Dublin, Leinster (excluding Dublin), Connacht, Munster and Ulster (covering Donegal, Monaghan and Cavan). The IMRO Music Festival of the Year Award will also be presented. One overall award will be presented for the IMRO National Live Music Venue of the Year. This Award is decided upon by the public, who vote for their live music venue of the year from the combined shortlist of all regions. Live music fans should simply log on to www.surveymonkey.com/s/venueawards and choose their favourite from the shortlist provided by Sunday February 19th. One lucky participant will win an iPod Touch.

The Hot Press Live Music Venue of the Year Readers Poll will also be part of the Awards and Hot Press fans can vote at www.hotpress.com/readerspoll . Editor Niall Stokes said: “2011 was another fantastic year for live music in Ireland. Venues across Ireland worked really hard to bring great music to the people, offering a huge range of choices to artists and fans alike. It takes real courage to invest in putting on live music in today’s economic climate, so a big thanks and congratulations are in order for everyone involved in making the Irish live circuit such a thriving scene.”

The IMRO Live Music Venue of the Year Awards have become an important badge of merit for venues across the country since its inception in 2008. Dublin’s Olympia Theatre took home three awards in 2010 and Brian Whitehead CEO of The Olympia said of the Awards: “It was a real honour to have our theatre and staff recognised and loved by industry professionals and music fans alike. The awards themselves take pride of place on our walls, so everyone from backstage staff to bar staff to housekeeping staff can be proud of their achievements.” Having won the Connacht region award for four consecutive years, Roisin Dubh promoter Gugai said: “There are plenty of music awards out there, but it’s great to have the IMRO Live Music Venue Awards to acknowledge the great work done by the staff in venues around the country.”

IMRO are now delighted to announce the venues that have been shortlisted in this year’s IMRO Live Music Venue of the Year Awards.