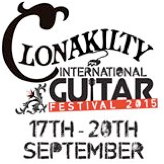 The Clonakilty International Guitar Festival returns this September to celebrate its eleventh edition with another foot-stompin’, fingerpicking, head-banging, eye-catching conglomeration of virtuosos, rogues and three-chord heroes, all descending on the seaside town for one glorious weekend- 17th -20th September. The Clonakilty International Guitar Festival (CIGF) is extremely proud to unveil this year’s world-class line-up.

Tennessee native VALERIE JUNE has been dazzling audiences worldwide since the release of her debut studio album Pushin’ Against A Stone produced by Dan Auerbach (The Black Keys). With performances on Later, Leno and Letterman along with rave reviews everywhere from the New York Times Magazine to Rolling Stone VALERIE JUNE’s inaugural performance at CIGF and only Irish show this year is not to be missed.

Every year the coastal town embraces the guitar as the festival surrounds this most scenic of locations in a blanket of string-based sounds.  The festival is an independently-spirited, community-based, audience-friendly weekend of musical treats.  It’s a celebration of Clonakilty: Guitartown.  It is the town that The Hendrix Experience’s Noel Redding chose to call home for 27 years and the legacy of Noel’s impact on his adopted home continues today in the venues and talent that he fostered within the town. The Clonakilty International Guitar Festival was founded by many musicians and music lovers directly influenced by Noel – including renowned producer John Fitzgerald who began his career in the music industry at the age of 15 playing in Noel’s band.

In addition to concerts, the festival presents a programme of workshops, master classes and seminars from some of the world’s best performers and experts, giving a glimpse of the methods and techniques which make them so successful. This years workshops sees master ukulele classes from the West Cork Ukulele Orchestra, Steve Cooney returns to give his now-legendary seminar at he guitar festival. John Spillane’s hugely popular songwriting workshop is back and the genial fingerstyle maestro Richard Gilewitz returns with his “Gilla-camp’ guitar clinic.  The weekend will see the arrival of Music Generation Limerick’s ‘Express’ bus, a double decker commuter bus retro-fitted to be a mobile venue, recording studio and workshop space.

There is also an Acoustic Forum, a concert in the round to give audiences the opportunity to get up close and personal with a selection of the festival headliners.  This year’s acoustic forum features Rachel Sermanni (SCO), Tommy Madden (IRL), Casey Black (US), Kyham Allami (IRAQ).

The Festival is run by a not for profit voluntary organisation of music lovers who strive to make the festival accessible to all with over 85% of the events across the 3 days of the festival are entirely free. The Clonakilty International Guitar Festival is a celebration of the guitar. There’s variety in both the acts and the venues that take part in the festival. Pubs, libraries, camper-vans, churches, street-corners, beaches, butcher shops – anything could happen, anywhere.

This is not a starch collared or stuffy nosed affair from virtuosos to noodlers, all are welcomed and exalted!

Tickets priced at €17.50 including booking fee. On Sale Now