Leading Irish chamber orchestra, Camerata Ireland, which includes players from both the North and South of Ireland embarks today on their second tour of Mexico (22nd – 26th October). Camerata Ireland will play in Mexico City, Leon and at the Festival Cerevantino in Guanajuato. 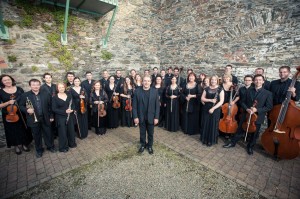 “We are delighted to be visiting Mexico again.  This year has been a memorable one for Camerata Ireland with tours to amongst others Chile, Argentina, Poland, Russia and Finland.  In the summer we made our debut at the BBC Proms and collaborated with the London Symphony Orchestra on a project in Derry/Londonderry as part of the UK City of Culture.  Our programme in Mexico is unusual, as we will be playing all of Beethoven’s Concertos, including the one for violin arranged for the piano.

“Camerata Ireland is a true flag-carrier for both parts of this island and is very grateful for the support of the Arts Council of Northern Ireland, Culture Ireland and our Global Sponsor, Randox Laboratories”.

In keeping with the policy of encouraging young musical talent, two players who took part in the recent master classes at the Clandeboye Festival will be playing with the Orchestra for the first time.  Thomas Porter (23) is a bassoonist from Bangor and Leonie Bluett (23) is a clarinetist from Kilkenny.  Leonie was the joint winner of the Young Musicians of the Future concert and was awarded £2,000 by the Flax Trust to help her continue with her studies.