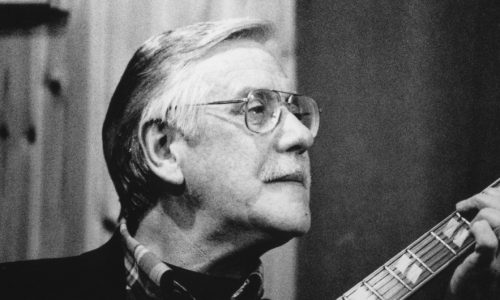 IMRO were saddened to learn of the passing of Louis Stewart over the weekend. Speaking as news came through Keith Donald, IMRO Chairman commented, “I first met Louis when I booked him for Trinity College Jazz Club in 1966. The following year he invited me to join him in a residency in The Fox Inn. I’ve gigged with him many times since then and will miss him. He was gentle, very funny and an amazing talent. Resquiat in Pacem”

Louis Stewart was an Irish jazz guitarist, born in Waterford who began his international career in 1968 when he was awarded the special jury prize at The Montreaux International Jazz Festival. Shortly thereafter he began working with Benny Goodman, an association that lasted three years, and gave way to an extended and prominent period with the late, great, English saxophonist/flautist Tubby Hayes.

In the 70s Louis began his lengthy association with George Shearing (with whom he had toured America, Brazil, and Europe) and recorded eight albums – several in trio with Danish bass master Niels-Henning Ørsted-Pedersen and in quintet with vibist Steve Nelson and drummer Dennis Mackrel. He began working with Canadian genius-orchestrator and arranger, Robert Farnon in 1976, and at least ten albums resulted: with singers Joe Williams and Eileen Farrell, with Shearing and with trombone legend J.J. Johnson, on all of which he is a prominently featured soloist.

In 1994, as a member of the Shearing trio, Louis featured for a week opposite Tommy Flanagan’s trio in The Blue Note, New York. This led to an association – still active – with Peter Washington and Lewis Nash which has included a week-long engagement, as leader, at the legendary Village Vanguard, NYC (with the masterful Richard Wyands in the piano chair, and, for that particular week, Kenny Washington, drums, substituting for Lewis Nash). Louis was the recipient of an honorary doctorate in music (Mus D) in 1998 from Trinity College Dublin and in 2009 Louis was elected to Aosdána, established by The Arts Council in 1981, to honour artists whose work has made an outstanding contribution to the creative arts in Ireland

Louis made Dublin his home but he performed regularly in Germany and Norway, where, in the national theatre, Oslo, his James Joyce / Ulysses inspired concert piece “JoyceNotes” has been produced to acclaim.  In 2013, he recorded an album of duets with his life-long friend Jim Doherty, called “Tunes” and in Dublin he regularly performed in JJ Smyth’s.