Songwriters perform ‘In The Round’

Songwriters perform ‘In The Round’ 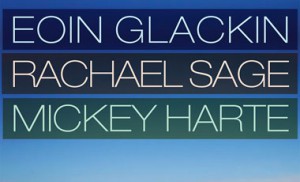 are to play a very special “in the round” show next month. Two of Ireland’s foremost singer songwriters, Dubliner Eoin Glackin and Donegal man Mickey Harte will join with New Yorker Rachael Sage for a very special show upstairs in Whelan’s Dublin on Sunday March 1st.

Following a busy end to 2014 promoting his latest single “Rain Finally Came”, Eoin Glackin will soon be heading for Germany for the release there of his album of the same name. Eoin has been making lots of new fans with many appearances on radio and online over the last few months including performances on The John Murray Show, Newstalk Breakfast and Joe Duffy’s Christmas Eve live show.

Hailing from New York Judy Collins has described Rachael Sage as “a great gift… of incredible talent and beauty,” while Billboard magazine reckons she is “the stitch between the great rock and pop traditions of the past and what those traditions have wrought in the hypermodern world of the present.”. Rachael will release her latest album “Blue Roses” on March 9th celebrating it’s launch in Ireland with this Whelan’s show.

Singer-songwriter Mickey Harte has been a mainstay of the Irish contemporary music circuit for well over 10 years. Career achievements include multiple Platinum records, Meteor Awards, regular RTE TV appearances, plus hundreds of concerts for audiences large and small across Ireland as well as Germany, France, Spain, Sweden, The UK, The Netherlands, and the USA. Mickey’s latest album is “Forward to Reality” and his new single will be released at the start of March.

Tickets to the event can be purchased here and are priced at €10: http://www.whelanslive.com/index.php/wav-tickets/eoin-glackin-tickets-2/