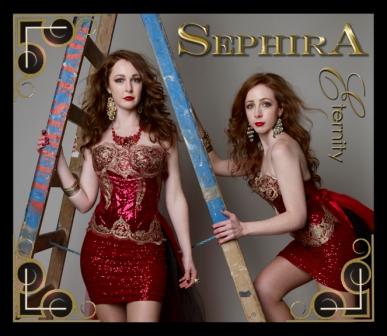 After completing 2012, with a star-turn as “Bond Girls” performing at the pre-premiere bash of the Bond movie, Skyfall, the string-driven vocal sensation, Sephira have announced the release of their brand new EP, Eternity.  Dedicated to the late Larry Hagman, star of hit TV series Dallas, Eternity is a nod to the friendship they shared with the star, and his unwavering belief in their music that has been invaluable in their rise to stardom.

Known to audiences from their many US TV appearances, Sephira, the creation of Irish siblings Joyce and Ruth O’Leary have broken away from their classical influences and have become known for their self-described “fiery fusion of dueling violins and ethereal vocals.”  Their sensational live show has taken Sephira across the globe, performing both public and exclusive private events for elite audiences, most recently a performance in Monte Carlo for Prince Albert of Monaco and another for Donald Trump at his Palm Beach resort in Florida.

Eternity, a five track EP, includes signature Sephira tracks; “Hallelujah” by Leonard Cohen and “Misirlou” from Pulp Fiction. The opening track is a cutting edge re-working of “Danse Macabre” by Saints-Saens and both “Palladio” by Karl Jenkins and “Danse Macabre” give the listener a glimpse into the powerful visuals of the new Sephira show.

Furthermore, the Eternity artwork cannot go unmentioned; a feast for the eyes and an invitation into the world of Sephira’s custom couture gowns. Their heavenly collaboration with Irish designer, Jacqueline Quinn, has resulted in Sephira performing live at World Fashion Week in Paris, November 2013.  Nominated as Haute Couture Designer of the Year, Quinn has commissioned

Sephira to compose the music for her runway show in Paris.  The personal strength and dynamic presence of Sephira are clear indicators of musicians who have fully arrived and are here to stay.

Eternity is available for digital download at iTunes on April 9th, currently available for pre-order.  Eternity Limited Edition physical copy will be released on May 27th and is now available to pre-order from http://sephirastore.weebly.com.