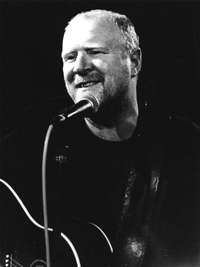 He began his career as a folk singer in Dublin in 1971. His professional debut was as the opening act for Planxty’s first Irish tour. In the ensuing years he moved through different phases and forms of music, from Trad, Country, Rock, and Contemporary, and toured the UK, Europe, and the US in a variety of different guises: doubling with Andy Irvine as a folk act on the European circuit in the early eighties, as lead singer with Moving Hearts, and lead singer/writer with Rusty Old Halo. The tours were interspersed with album releases (fourteen in total). In the late eighties he concentrated on song writing, capturing two BMI awards (1 million Radio plays and Most Played Country Song in the US in 1992) for his song ‘Past the Point of Rescue’.

Throughout the eighties he picked up two Hot Press and two National Entertainment awards. In 1985 he formed his own publishing company, Doghouse Songs and oversaw the collection of royalties until signing with Peer Music London in 2001.  Wearing a non-musical hat, he spent seven years on the Executive Board of the Kilkenny School Project while his daughters were in attendance; four of those years as Chairperson of the Board. In 2008 he did a course in Psychotherapy, qualifying in 2012.

Presently, he is recording a four song EP for release at the end of the summer. They are saga songs in folk mould. His songs have been recorded by numerous artists: Moving Hearts, Christy Moore, Dolores Keane, Ronnie Drew, Mary Black and Delbert McClinton. He continues to write and tour.