The Mandolas – ‘My Greatest Day’ 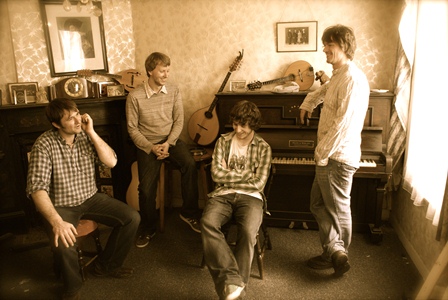 Cork based folk/pop quartet,The Mandolas are set to release their debut EP, ‘My Greatest Day’ in April with a nationwide launch tour to follow.
The tour will include two Cork dates: the official EP launch in Cyprus Avenue on Fri 13th of April (with support from Lynda Cullen), and an evening in De Barras of Clon on Thurs 26th of April. The tour will also see The Mandolas perform in Dingle, Limerick, Galway & Dublin.
Tickets for each night will cost €5. The 5 track EP, featuring original artwork from renowned artist Dubhaltach O’ Colmain, will be available for purchase on the night at each venue.
“The combination of traditional sounding songs and four male singers harmonising made them sound like an Irish version of The Beatles”
-Evening Echo
“there’s nary a sniff of a rhythm section or electric instrumentation, yet this quartet play with a fierce intuition that over-rides the need for either. Inevitably, Irish folk comparisons with the fiery likes of Luke Kelly will be bandied around in future, but these boys are equally convincing whether attacking dextrous jigs and reels, Dave Swarbrick-style workouts or punchy Folk-Pop numbers… Add in some enviable four-part harmonies and they’re shaping up to be a truly incredible string band. More please, and soon.”
The Mandolas are a 4-piece folk/pop group based in Cork, Ireland. The band make use of a wide range of acoustic instruments (mandolin, mandola, acoustic guitar, bouzuki, banjo and viola) as well as incorporating lavish 4-part harmonies into their music. The Mandolas perform original material and combine Irish and English folk traditions with a unique blend of contemporary pop.
The group consists of Michael Grace (Kilkenny), Colm Hayes (Cork), and brothers Paddy & Dorian Kelly (West Cork/ originally hailing from Yorkshire). Drawing inspiration from the likes of Planxty, The Beatles, The Beach Boys, and Fleet Foxes, The Mandolas unique folk stylings combine a wide array of musical influences to create a fresh, warm sound.
Formed in October 2010, The Mandolas began to write and perform original material in Colaiste Stiofan Naofa, Cork. Having gigged consistently since then, on both the local and national music scene, the group have been steadily making a name for themselves in Ireland. In 2011, The Mandolas have had the privilege of sharing a stage with such accomplished artists as Paul Brady, Maria Doyle-Kennedy, and Mike Hanrahan of Stocktons Wing fame to name but a few.
In late 2011, The Mandolas began recording their debut single & EP in Cork City. Entitled ‘My Greatest Day’, the bands first commercial release will be available in March 2012, with a nationwide launch tour to follow. The album was recorded by Carthach O’ Nuanain, and features artwork created especially for the project by Blasket island born artist, sculptor and published author, Dubhaltach O’ Colmain. The EP features original material written and performed by The Mandolas.
www.themandolas.com