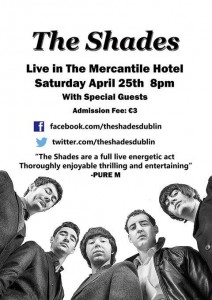 Rock ‘n’ Roll influenced The Shades will be playing their first headline show in the Mercantile Venue, Dame Street, Dublin 2 on April 25th 2015.

The show precedes the release of the group’s debut single ‘I Give Up’ which will be available online and in stores this May.

The Shades are a five piece rhythm ‘n’ blues / rock ‘n’ roll group from Dublin. Made up of five hardworking, accomplished musicians and taking inspiration from artists such as The Rolling Stones, The Beatles, Chuck Berry and The Yardbirds, The Shades are on their way to bringing this raw rock ‘n’ roll sound to the mainstream.

The Shades performed at the Body and Soul Festival in June of 2014 to an energetic crowd. In July, the group began releasing a series of YouTube videos showcasing the raw, back to basics ethos of their live performances entitled the ‘Live Sessions”.

The Shades have toured the UK and Ireland in the past year while also performing locally in venues such as Sweeney’s, The Workmans Club, Dame Lane and Whelan’s supporting The Statics.

They took part in Guinness Amplify, regarded as an expert pick, touring the country to play shows in Armagh, Sligo, Clare, Limerick and Cork. The Shades also appeared at the Cork Jazz Festival in Barry’s pub in Douglas to a packed venue.

In December 2014 the Shades supported Dublin band The Hot Sprockets on their Irish tour in Coughlans Venue in December 2014. Impressed by their performance, the band were invited back to headline their own show in February 2015.

The Shades will be playing their first headline show in the Mercantile Venue, Dame Street, on the 25thof April. Admission to the gig on the night will be €3, with doors opening from 7:30pm. The event is strictly over 18s. Support on the night from Penrose, an indie style rock band from Dublin whose range of original songs will tie in well with the night.

Its shaping up to be a great night of live music and a large crowd is expected on the night.
“The Shades are a full live energetic act…thoroughly enjoyable, thrilling and entertaining”
– Pure M

“Several of their own numbers…could be hidden songs from The Beatles debut album
‘Please, Please Me”
– DublinConcerts.ie