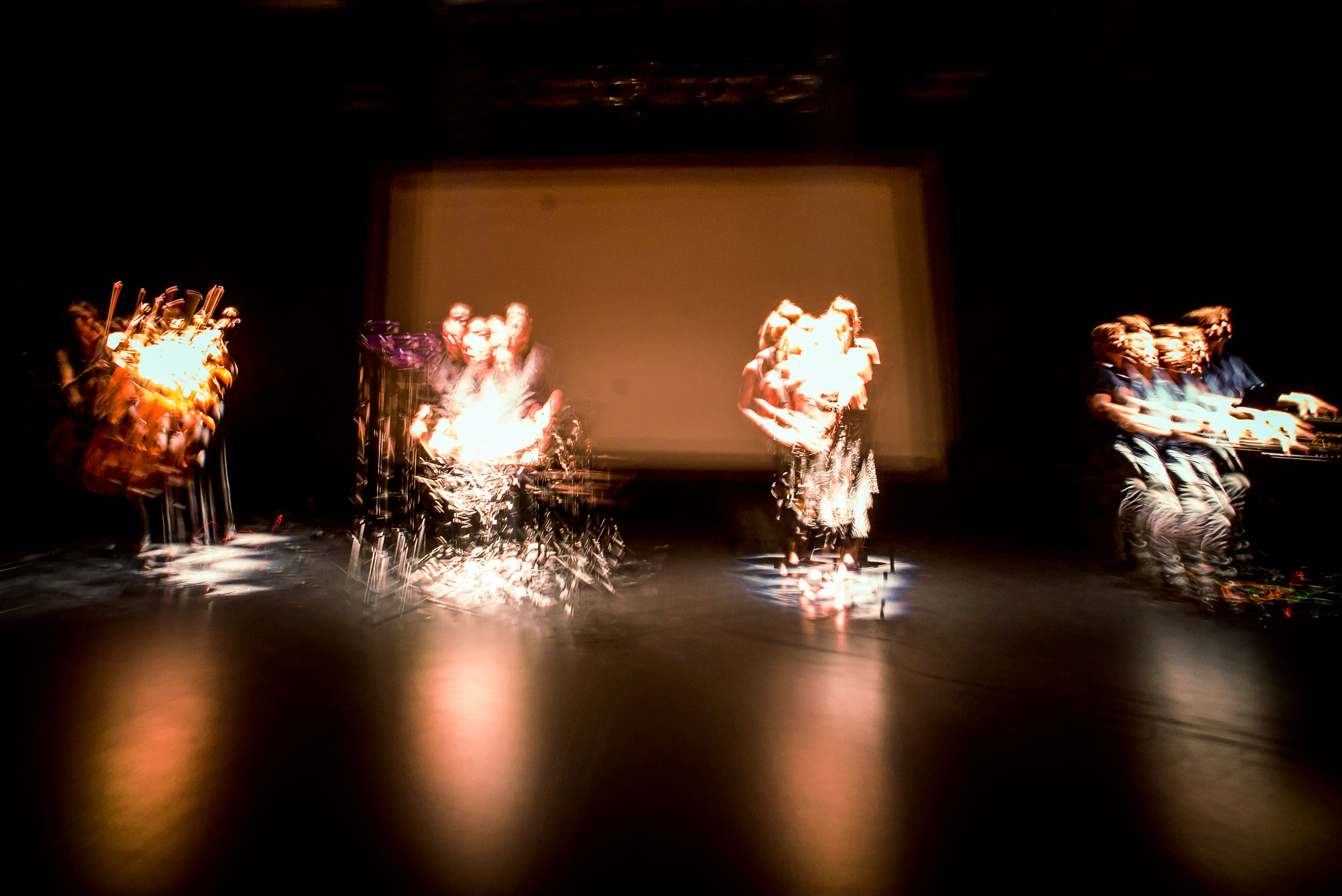 Ireland’s most ambitious and most adventurous contemporary music festival MUSIC CURRENT moves into a new home at Project Arts Centre for 2020. With 7 concerts over 5 days, as well as participation workshops, this year’s line-up showcases some of the most fearless innovators contemporary music today. The 2020 programme is entirely made up of Irish premieres and sees many artists, such as Alexander Schubert and Decoder Ensemble from Germany; Kazakh violinist Aisha Orazbayeva; and Australian pianist Zubin Kanga, who perform in Ireland for the very first time. This annual contemporary music festival stages the best of new Irish and international contemporary electronic music. Growing to a five-day festival this year, with concerts, panel discussions, composer talks, and a music commission, this unique event runs from 14–18 April.

MUSIC CURRENT has a reputation for presenting music that is at once both fun and challenging, and this year the programme includes virtuosic sonic ‘pyrotechnics’ for flute and electronics, performances with augmented instruments and electronic sensors, interactive video, and music generated by the public via the internet during live performances. The festival is a showcase of the “newest of the new” music from Ireland and worldwide.

Festival Director Fergal Dowling commenting on this year’s programme says: “I am excited to bring Music Current Festival, now in its fifth year, to a new home at the Project Arts Centre. The festival keeps growing and this year we have seven concerts over five days, as well as two participation workshops. As usual, we have a strong international presence – with artists from Germany, Austria, France, England, Italy, Scotland, Australia, and Kazakhstan – as well as some of the most striking and original voices in Irish music, like Scott McLaughlin, Piaras Hoban and our commissioned composer Seán O’Dálaigh.”

Decoder Ensemble is one of the most innovative and fearless young groups in contemporary music. For MUSIC CURRENT 2020 they present a programme including works by ensemble founder, and new music iconoclast, Alexander Schubert. Distinguished by their high-energy, irreverent performances and their enthusiastic embracement of multimedia and electronic forces in their shows, Decoder Ensemble make each concert programme a choreography of music, light, video, electronic sound and live performance. In their first visit to Ireland the group presents works by ensemble composers Alexander Schubert and Andrej Koroliov, as well as multimedia works by Michael Beil and Malte Giesen. Not to be missed!

Kazakhstani violinist Aisha Orazbayeva presents her acclaimed reimagining of G.P. Telemann’s Violin Fantasias, 16 April, rendered here in a shockingly fresh contemporary style through use of modern extended violin techniques.Renowned for her daring interpretations of contemporary music and radical approaches to early repertoire, Aisha has released three solo albums with music ranging from her own compositions to Telemann and Sciarrino. She has performed internationally, including at Carnegie Hall, HAU2 Berlin and Tokyo’s SuperDeluxe. Orazbayeva’s performances of Telemann’s Violin Fantasias range from personal and stylistic interpretations to versions marked by the distortion and fragmentation of the material. Aisha Orazbayeva’s programme of Telemann’s Violin Fantasias makes her programme the earliest works performed in Music Current by about 265 years!

Also on 16 April is Karlheinz Essl’s Gold.Berg.Werk, a set of electronic variations on Bach’s famous Goldberg Variations (1741), performed by pianist Xenia Pestova Bennett with the composer performing live electronics.The Goldberg Variations form a cornerstone of keyboard repertoire, yet we rarely question the mode of presentation for this piece. Essl offers a refreshing glimpse of a new performance practice through his unusual take on this work. Essl’s re-invention was originally envisioned as a performance environment for string trio, but now this new version for piano and live electronics will be heard in Ireland for the first time. Pestova Bennett is an innovative performer and educator. Described as “a powerhouse of contemporary keyboard repertoire” (Tempo), “stunning” (Wales Arts Review), “ravishing” (Pizzicato) and “remarkably sensuous” (New Zealand Herald), she has earned a reputation as a leading interpreter of uncompromising repertoire and masterworks from the past. Essl, is renowned for his many ‘real-time’ compositions and for his work in generative music. He is equally well known as a computer musician and for his development of software environments for algorithmic composition – notably, his Real Time Composition Library (RTC-lib) for Max/MSP/Jitter. As well as being a highly prolific composer, Essl also regularly acts as a performer and improviser.

Scottish flautist Richard Craig presents a new programme, FOUR FFF, featuring only most recent works, commissions and premiers, all written purposefully for him. Richard is joined by French composer/perform and computer music wizard, Gilbert Nouno in this exploration of new music from Ireland, England, France, and Argentina that engages all the technical resources of the performer, the instrument, and digital media. This concert includes Piaras Hoban’s new work developed during extended collaborations with Richard for ‘feedback flute’. Hoban’s new work uses acoustic feedback to reinforce harmonic overtones inside the flute to create a glistening wall of sound.

Austrian new music pioneers, Schallfeld Ensemble, are regular guests at major international music festivals (Wien Modern, Implus, Darmstadt, Poznan, EMA), and now at Music Current they bring their trade make innovative concert stagings and repertoire to Dublin for the first time, presenting a programme with long-time collaborator Marko Ciciliani, which overtly references game culture. All the works in this programme integrate competitive and interactive elements from computer games into the fabric of the compositions and whole concert setting. Four members of the ensemble will perform together with composer Marko Ciciliani.

Recipient of the Music Current 2019 Commission, Kerry composer Seán O’Dálaigh returns to Music Current Festival for the premiere of his new work with Richard Craig in the festival’s annual CURRENTS event. Seán’s music is deeply rooted in locality, installation practice, engagement with the performance space and social context. In this new work Seán draws together elements of multi-media and collaborative practice to unveil a deeply resonant transcendent work.

WIKI-PIANO is another Irish premiere this time by Australian pianist and new music adventurer Zubin Kanga who performs in Dublin for the first time. A champion of collaboration and new music commissioning, Zubin performs a highly personal programme entirely of works he personally commissioned for piano and electronics. As well as being known for his highly idiosyncratic performances, Kanga is also a composer, improviser and technologist. His work in recent years has focused on new models of interaction between a live musician and new technologies, using film, AI, motion capture, 3D modelling, animation and virtual reality. Zubin has developed a practice based around commissioning and collaboration, and here he premiers a new work, Fake, for piano and score-following computer by composer and festival Director Fergal Dowling.

Dowling also says: “Our visiting artists and composers are amongst the most active and innovative contemporary musicians today, like: Decoder Ensemble and our featured composer Alexander Schubert, who create truly theatrical multimedia performances; or Karlheinz Essl, Xenia Pestova Bennett, and Aisha Orazbayeva, who are conjure entirely fresh reinventions from Baroque music masterworks for piano, violin and electronics; or Richard Craig’s virtuosic pyrotechnics for flute and electronics; or Schallfeld Ensemble who augment their instrumental palette with sensors, visuals and electronic devices; or Zubin Kanga who interacts with video and publicly generated music during his performances – they are all highly inventive music performers. Together with our invited and commissioned Irish composers, they make Music Current Festival a showcase of the most current, most fun, most accomplished and most challenging music.”