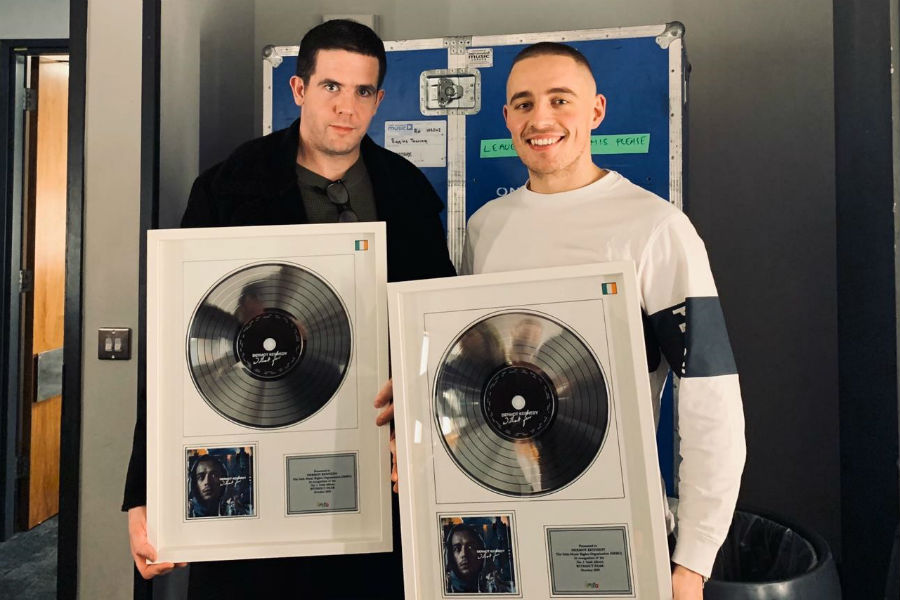 IMRO took the opportunity to present Dermot Kennedy with an IMRO Number 1 Award before the second of his two sold out dates in Dublin’s 3Arena over the Christmas period. The IMRO Award was in recognition of his album ‘Without Fear’, which topped the Album Chart following its release in late September.

The IMRO Number 1 Award was introduced to acknowledge IMRO members who reach number 1 in the album charts in Ireland.

The release of Kennedy’s long-awaited LP was followed by his biggest ever UK tour dates, plus two huge homecoming gigs at Dublin’s 3Arena in December — all proof that the 27 year old, already known the world over for his bruising voice and bracing lyrics, is ready to go to the next level. The 12-track album is “my best effort in presenting myself to the world,” he thinks. And as ever, it shows his ability to span a whole range of emotions, often in the space of just one song.

“I wanted it to represent darkness and sorrow but also hope, and that battle between them, and the way that in life you’ll inevitably experience beautiful things and terrible things,” he says of the album. ‘Without Fear’ dwells directly on a time when, just as he fell in love, he lost a close family friend. Writing songs has helped him deal with that rollercoaster time. “This is the only way I know how to put feelings across,” he says. “Great people like Van Morrison, they did this too. So you’ve got to do it.”

Few doubt that Kennedy is on the way to being one of the greats himself. Thanks to the success of songs like ‘Lost’, ‘Outnumbered’ or the career-defining ‘Power Over Me,’ he has gained over 600 million streams and boasts 7 million listeners monthly on Spotify alone. He has received a nod in the BBC Sound Of 2019 and was voted NPR Slingshot’s Best New Artist of 2018. He has toured Europe, America and Australia, and made his debut on US television on the Stephen Colbert show, soon followed by an incredible performance on The Ellen Show. His sold-out headline tours have shifted over 100,000 tickets including a recent career-defining performance at the Filmore Auditorium in Denver to a 4000-strong audience. “I’m still pinching myself every time we put a tour on sale and it sells out,” says Kennedy, whose hypnotic live shows have become word-of-mouth sensations.

“When I do a gig, I gather people say, ‘Oh it’s amazing how you’re so passionate and put that energy out there,’” he recounts. “That’s because I give you all I’ve got. If 4000 people show up and put their faith in me… I just feel like I’ve got an obligation.”

‘Without Fear’ is full of the anthems which Kennedy has made his name with. The main inspiration is the time where, just as he met the woman who would become his partner, his sister’s boyfriend was killed in a freak flood. For Kennedy, it was a defining moment. “A lot of my songs have her in them, but obviously have my grief in there too,” he says. The LP has a narrative running from bliss to loss to redemption — “it’s very important for me to have an album that has a story running through it,” he confirms. In an era of quick hits and disposable tracks, Kennedy wants to make something enduring. “Everyone I look up to does that,” he explains. “People like Kendrick Lamar, Hozier, J.Cole, Bon Iver – they all have projects that mean something.”

The sound of the album is a mix of similar influences, acoustic song writing mixed with an electronic, hip-hop edge. Kennedy’s sound is rooted first and foremost in his childhood in rural Ireland, in a household always playing songwriters like Damien Rice or David Gray. When he was given his first guitar aged 11, it was their footsteps he started in. He gained new inspiration, though, when he came across seminal rap albums by the likes of 50 Cent. “It’s just so exciting as an art form,” he says of rap. “It’s almost the most potent.”

Yet another influence is def poetry, which a friend on his football team first switched him onto when he was 18. This virtuosic spoken word verse is “almost an elite level type of rap”, says Kennedy, and is great schooling when it comes to song writing. “You can’t hide at all. Every single line and every single beat have to be perfect. So those are the people who inspire me the most.”

The album brings all these cultures together and more to produce something bracing and original. Kennedy doesn’t want the album to be just one thing – “we’re trying to push things, sound-wise,” he confirms. His standards are, he admits, very high now. “I never, ever want to be seen as somebody who took a shortcut because it seemed like a good idea.” But fans who know him know that a shortcut is the last thing he offers. Indeed, the release of ‘Without Fear’ will provide them with an even deeper connection to Dermot Kennedy’s world. And he needs the fans, he admits, as much as they need him.

“I think it’s the most beautiful way to get to be a musician,” he says. “To travel the world and play your songs every night. It saves you every day.”