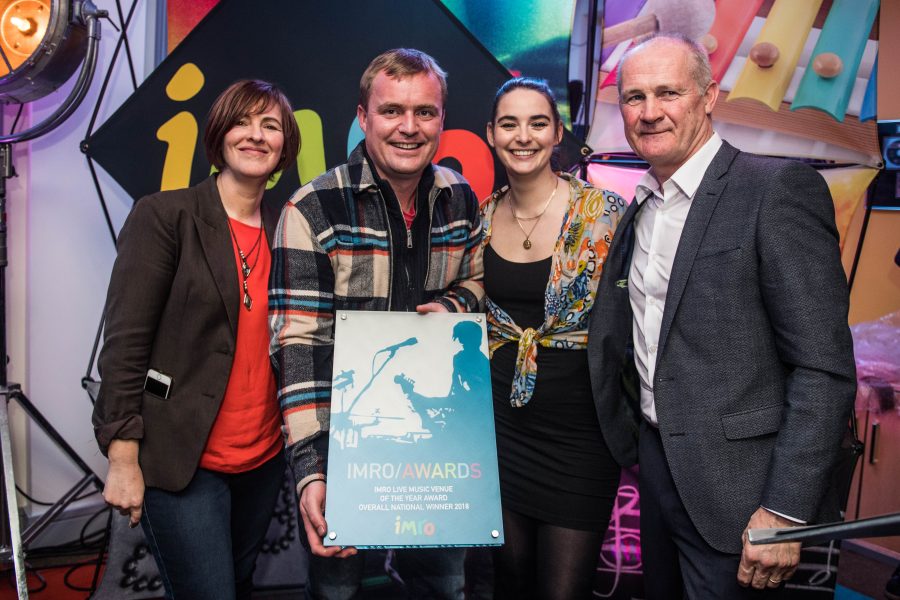 The award for National Live Music Venue of the Year 2018 (via public vote) went to The Sugar Club, Dublin.

Of the annual awards voted by over 12,500 IMRO members Victor Finn, IMRO Chief Executive said “We’re privileged in Ireland to have such a vibrant and eclectic live music scene, which is the backbone of the music industry as a whole. We feel it is vital to acknowledge the venues and festivals who support live music from a musician’s first performance right through to internationally known headline artists on main stages. It is these venues and festivals across the country that allow music creators to continue making music and bring it to new audiences.”

Other winners in the regional categories include

Olympia Theatre, Dublin picked up the award for IMRO Tech Crew of the Year.

The IMRO Outstanding Contribution to Live Music accolade was awarded this year to Joe Clarke, co-founder of CWB, a music focused management and production company with offices in Dublin and a residential production studio in Co. Tipperary. With a background in venue ownership and management, together with partners Paul Webb and Paul Boland he opened CWB in 2008 with the Rubberbandits being their first management client. Following their worldwide success, the company expanded adding The Strypes and Le Galaxie to their roster. Currently, CWB manages Bitch Falcon, The Blizzards, Mark Mc Cabe, RSAG, Jack O’Rourke, Kormac, Stomptown Brass, Maud in Cahoots, Jerry Fish, Montauk Hotel, Thumper, Paddy Dennehy and more.

Performances on the night came from Pillow Queens, Moncrieff and Inhaler.

He said: “This is a hugely optimistic moment for Irish music. There is an extraordinary talent pool here. A growing number of artists and bands are releasing music of real heft. And as a result Irish artists are achieving significant successes beyond these shores in greater numbers than ever before. But it is still extremely difficult for musicians to earn a living. Which is why a vibrant live music scene is so important.

Hot Press is really proud to be part of the IMRO Live Music Venue Awards. The purpose of the awards is to celebrate the contribution made by the people who run venues and book shows all over Ireland. Over the past few years, we have seen a resurgence in live gigs – which is reflected in the venues that Hot Press is honouring tonight. It is a deep love of music – as well as an entrepreneurial spirit and a sense of fun – which inspires a great venue like Mike The Pies in Listowel. And the same is true, in different ways, of the people behind Live at St. Luke’s in Cork and The Chasin’ Bull in Bundoran. Long may they – and venues like them – continue to thrive.”

IMRO Music Festival of the Year 2018 – All Together Now

Hot Press Live Venue of the Year for 2018 – Mike the Pies, Listowel with special Hot Press commendations going to Live at St Luke’s, Cork and The Chasin’ Bull, Bundoran.