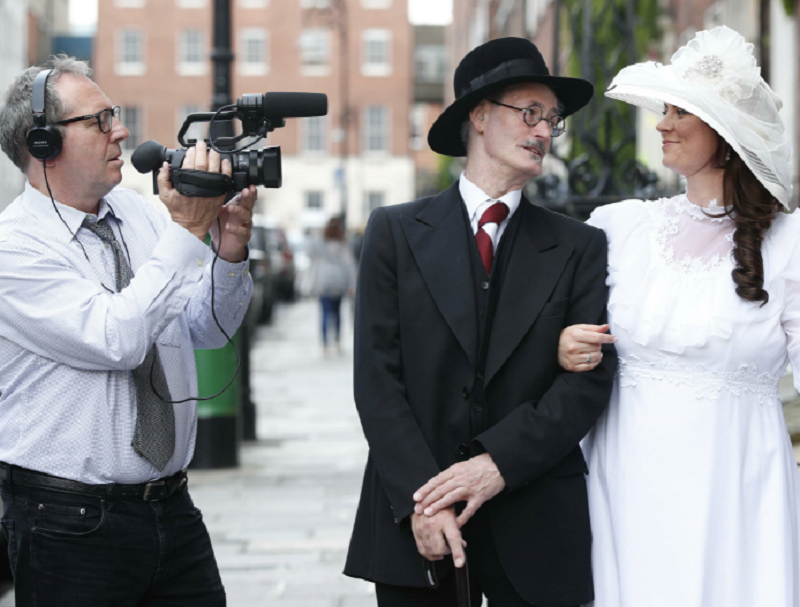 Rare is the Irish lyricist who hasn’t been directly or indirectly influenced by the work of James Joyce. Even John Lennon upon reading Joyce for the first time said “it was like finding Daddy.” This Bloomsday Eve gives Rohan Healy and Godfrey Jordan the opportunity to present a three-hour event of music, screenings and discussion about their film-music collaboration a new documentary series, to premiere at IMRO HQ.

The major narrative arts converge in the James Joyce Documentary Project which explores the life, times and influence of the great Irish author. Music played an important role in Joyce’s life: his tenor voice won him awards in competitions; the guitar was his preferred instrument for playing; his books wove the lyrics of his era into the background of his storytelling. Rohan and his team of fellow musicians created a series of tracks to complement the video footage that Godfrey captured during last year’s Bloomsday events in Dublin. They will discuss the co-operative relationship between a music supervisor and a director; international collaboration via Internet; scoring and editing; and composing for the screen, with analysis of two songs featured in the Project.

Rohan Healy has spent his entire life in the music industry. From a young age he was touring with the likes of Cat Power & Billy Bragg alongside his father David Virgin, of SPK and Sekret Sekret fame. He performs with and manages successful duo ‘Dublin City Rounders’ and is the CEO of Beardfire Music Label & Recording Studio. Rohan has hundreds of recording and production credits to his name, is a music scout for international publishing & Sync Licensing Library Gnarles and presents Rhythm & Roots and The Irish Music Business Show on Dublin City FM.

Godfrey Jordan emigrated from Clontarf as a youngster and later returned to work in the Eamonn Andrews Recording Studios at The Television Club during a rollicking era. Back in Canada he graduated with a university degree in film, freelanced for all media, covered sports and space shuttle launches, and completed a full time government career creating award-winning corporate video productions. He is a Canadian Film Centre alumnus and author whose books have been translated into five languages. He attended the original Woodstock Music Festival and his photojournalism during the Summer of 1969 classic rock era features portraits of John Lennon, Jim Morrison, Jimi Hendrix, B.B. King, Mick Jagger and others that now belong in private collections. He lives with his family in Toronto and this latest project supported by the James Joyce Centre, Dublin, brings everything full circle.

The event will include a screening of three short films: “A Touch of the Artist about Old Bloom,” “Portrait of the Milliner as yer man himself” and “Bloomsday ReJoyce.” The Dublin City Rounders will perform a few numbers following the screening. Godfrey will read a brief section from his novel “The O’Credible Showband” set in the long-ago demolished Eamonn Andrews Recording Studios on Harcourt St. And to make the occasion official, anticipate a visit by “yer man himself” Mr. John Shevlin, the official look-alike for the James Joyce Centre, Dublin.