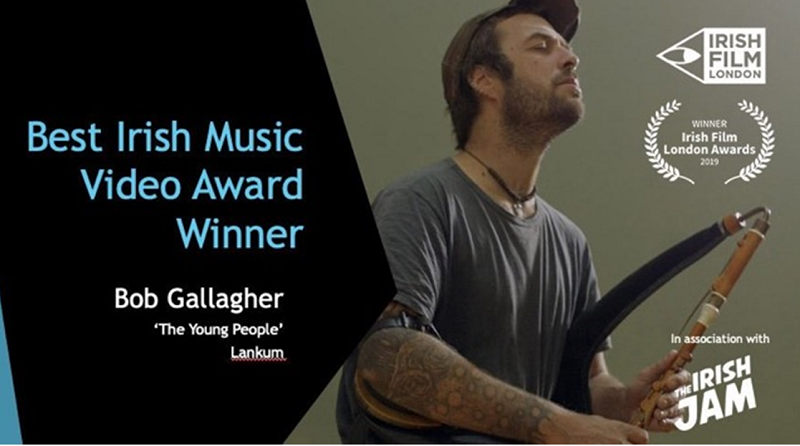 Irish filmmaker and visual artist Bob Gallagher has won the Best Irish Music Video Award for his work directing ‘The Young People‘ for the band Lankum, at the 2019 Irish Film Festival London. The video was originally premiered with a feature on the American music website Billboard. ‘The Young People’ explores body language, characterisation and how micro narratives can be gleaned from focusing on just people’s feet. Using a mix of documentary footage captured around Dublin City and a performance by the band, the video touches delicately on the theme of suicide, contrasted with the ephemeral movement of bodies through the city over the course of an autumn morning.

The award ceremony was hosted last week at the Irish Embassy in London. Bob also received a second nomination for his work with Junior Brother on the video for ‘Full of Wine‘. This is Bob’s second time winning the award at the London Irish Film Festival. In 2018 he received the Best Irish Music Video award for his work with Pillow Queens on the video for ‘Favourite‘. He was also nominated in 2018 for Villagers ‘Fool‘.

Bob was recently featured in the October edition of Totally Dublin Magazine as one of five leading Irish filmmakers working in the medium of music video. The article, which describes Bob as ‘One of the nation’s premiere creative forces in the visual arts‘ can be viewed here.

Gallagher has crafted award winning music videos collaborating with acts such as Girl Band, Villagers, SOAK, Lisa Hannigan, Pillow Queens, Junior Brother, Myles Manley and James Vincent McMorrow.  His recent video for ‘The Young People’ by Lankum is one of a series of videos he has been commissioned to make by renowned London label Rough Trade Records, which this year also included a collaboration with contemporary dancer Oona Doherty for Girl Band’s ‘Shoulderblades‘.

In 2017 Bob was hand picked to attend a ten day practical workshop in Cuba with Werner Herzog, after which he was declared by Herzog to be a ‘Good Soldier of Cinema’. The workshop resulted in two short documentary films currently on the festival circuit, ‘Salon’ and ‘The Impossible Flight of the Stone’.

Bob was invited earlier this year by Dublin City Council to stage a retrospective of his music video work titled ‘Under My Garage‘ at the Music Town Festival in Dublin. Taking the form of a fictional late night talk show, Under My Garage combined live music, visuals, and on-stage interviews centred around Bob’s music video work. The performance included appearances from Villagers’ Conor O’Brien, Girl Band, Pillow Queens, Ena Brennan, Participant, Cal Folger Day and Myles Manley. This year also saw Bob stage his first solo photography exhibition ‘Forced Perspectives‘ as part of an artist residency at The Darkroom, Dublin. which went on to feature in the Photo Ireland Festival. Bob was also invited to participate in the inaugural Fermanagh-Omagh District Council International Artist’s Residency, working with young people across loyalist and nationalist communities to create short film projects.

Bob is currently based in New York City where he is developing his first feature film script.