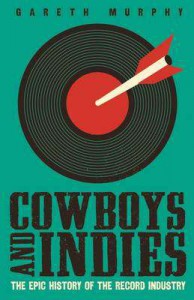 (as part of Dalkey Book Festival)

Following the recent publication of his lauded tome Cowboys and Indies:The Epic History of the Record Industry author Gareth Murphy makes a special appearance at Dalkey Castle Town Hall on Sunday June 14 as part of this year’s Dalkey Book Festival.

From the invention of the earliest known sound-recording device in 1850s Paris to the CD crash and digital boom today, Cowboys and Indies takes us on a fascinating and wildly entertaining tour of the ever- changing music industry, introducing us to the performers and self- proclaimed ‘record men’ of the UK and America.

Combining colourful behind-the-scenes stories with tales about the business of marketing and selling music, Cowboys and Indies covers all the most important recordings, events and chance meetings of the past 150 years and the companies that brought them to us.

Gareth draws on archival material and over a hundred exclusive interviews with the legends of the music business to bring us the riveting stories of how the industry crashed with the arrival of the radio, the British Invasion, the birth of disco, John Hammond’s discoveries of Billie Holiday, Aretha Franklin, Bob Dylan, Leonard Cohen and much more.

Join the author in conversation with Hot Press’ Roisin Dwyer about Cowboys and Indies, its discoveries, and how they’re influencing today’s rapidly changing industry

‘If this book was a group, I would definitely sign them. It is that good.’ – Geoff Travis, founder of Rough Trade

‘It’s the text book, yet it reads like an adventure story.’ – Seymour Stein, founder Sire

‘A tour de force that makes you almost want to dance with that devil again.’ – Andrew Loog Oldham, manager and producer for the Rolling Stones