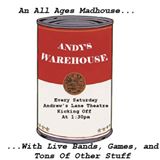 Garageland are proud to announce an all ages event which will happen every Saturday from Aug 2nd 2014 in Andrew’s Lane Theatre Dublin.

Andy’s Warehouse is a brand new concept which is designed to create a space for young creative musicians, as well as providing a fun hangout for people to go to on a Saturday afternoon.

Andy’s Warehouse kicks off on Saturday 2nd August at 1.30pm and stays open until 7pm

Bands confirmed to play over the coming weeks include The Dark Lanes, Jet Set Radio, Sleepy Dreamers, Myth, Publicity, The Klares, Crossfire, The Rain, No Strangers, with many more to confirm

Any bands or artists who wish to play Andy’s Warehouse should contact ei.dnalegarag@ofni