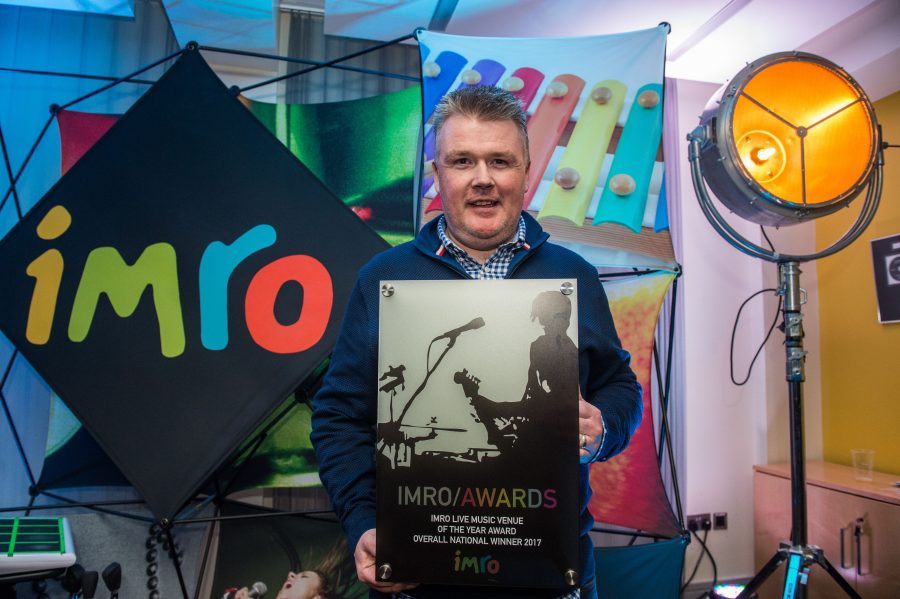 The award for National Live Music Venue of the Year 2017 (via public vote) went to Mike The Pies, Listowel Co Kerry.

Of the annual awards voted by over 12,000 IMRO members Victor Finn, IMRO Chief Executive said “A strong live music circuit is the lifeblood of a vibrant music industry.  It is important that we acknowledge those venue owners and festivals promoters whose commitment, passion and support for live music throughout the country enables music creators to continue making the music we all enjoy”.

Other winners in the regional categories include

Rest of Leinster –  The Set Theatre

Vicar St, Dublin picked up the award for IMRO Tech Crew of the Year.

The IMRO Outstanding Contribution to Live Music accolade was awarded this year to Willie Meighan, formally proprietor of Rollercoaster Records in Kilkenny, who sadly passed away in November 2017, aged just 48. Willie’s beloved partner Aisling and Willie’s family members were at the ceremony to accept this special Award.

Performances on the night came from Le Boom, Chasing Abbey and Wild Youth.

He said: “This is a hugely exciting time for Irish music. We are continuing to produce singers, songwriters and bands capable of taking on the world, working in a wide variety of styles and genres. The likes of Loah, Lankum, David Keenan, Jafaris and Hudson Taylor – to name just a few of our new breed of hopefuls – are all very special artists. It is particularly exciting to see Rejjie Snow becoming the first real global breakthrough Irish hip hop artist.

“What’s especially encouraging is that live music is also flourishing all over Ireland. New venues have been opening. Older ones have been resurgent. People are investing serious money in making things happen.

“In all of this it is really important that venues are musician friendly – which is such a central part of the appeal of the Hot Press Live Venue of the Year for 2018, Vicar Street. It is also true of a more traditional venue like Kavanagh’s of Portlaoise, which has made great strides over the past 12 months; and of the INEC in Killarney, which successfully caters for big international acts as well as local heroes. Both of these venues are the recipients of Special Commendations from Hot Press and its readers. A big congratulations and well done to all.”

IMRO Small Music Festival of the Year 2017 – Another Love Story

Hot Press Live Venue of the Year for 2018 – Vicar St with special Hot Press commendations going to the INEC, Killarney and Kavanagh’s of Portlaoise.