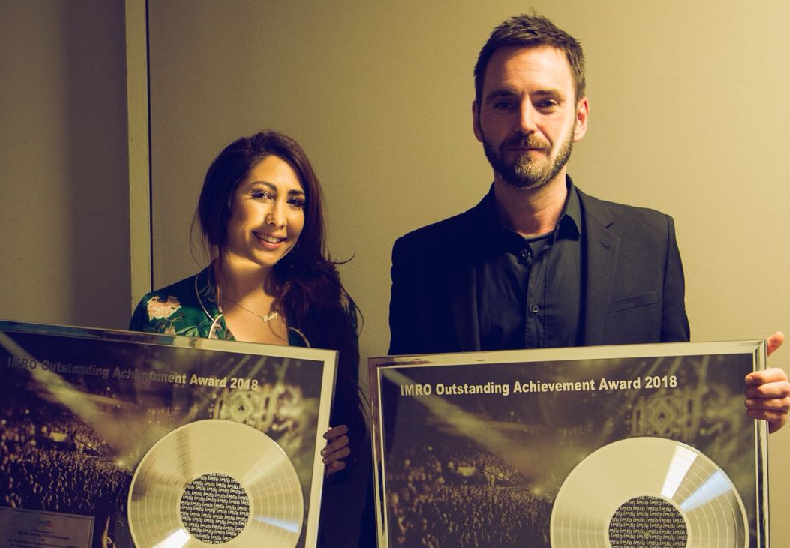 International hit songwriters Ruth-Anne Cunningham and Johnny McDaid were presented with IMRO Outstanding Achievement Awards at the Radio Days Ireland conference which took place in the Gibson Hotel, Dublin this evening.  These awards recognise the enormous contribution that both songwriters have made on the global stage.

IMRO Chairperson Eleanor McEvoy said, “It is an honour to present both Johnny and Ruth-Anne with an IMRO Outstanding Achievement Award. Both Irish songwriters have made an undeniable impact, leaving their own imprint on contemporary music worldwide which will last for many years to come”.

With a powerhouse voice and a whole lot of soul, Ireland born and London based Ruth-Anne found the missing link between gritty nineties R&B à la Lauryn Hill and seventies songwriter storytelling reminiscent of Carole King. The musical journey of artist, songwriter, to performer Ruth-Anne has been marked by fearlessness. By the age of seven she regularly took the mic at karaoke bars, winning free drinks for mom and dad. Moving to Los Angeles at 17, she kicked off her career penning music for other artists.

She still writes for other artists including Niall Horan co‐writing half of his album including ‘Slow Hands’, Martin Garrix including his single ‘In The Name of Love’ ft. Bebe Rexha, Thirdstory, Britney Spears, John Legend, JoJo including ‘Too Little Too Late’ and more. She is now stepping into the limelight as an artist with music coming at the top of 2018.

Johnny McDaid is the prolific songwriter and producer behind a wide array of recent chart hits. On March 31, 2017, five of the UK’s top 11 albums included his songs: Ed Sheeran’s ‘÷’ and ‘x’, ‘Human’ by Rag ‘n’ Bone Man, James Blunt’s ‘The Afterlove’ and Zara Larsson’s ‘So Good’. Those songs include Sheeran’s ‘Shape of You’, now one of the most popular singles of all time.

Born in Dublin and raised in Derry, Northern Ireland, McDaid moved to London in his late teens and spent a decade leading his band Vega4, whose song ‘Life is Beautiful’ featured prominently in a number of US TV dramas and films. When that band split, Snow Patrol members Jonny Quinn, Gary Lightbody and Nathan Connolly set up a publishing company, Polar Patrol Publishing, and made McDaid their first signing. Johnny has since written soundtracks and numerous songs for movies alongside Snow Patrol frontman, Gary Lightbody. McDaid went on to tour with Snow Patrol during the Fallen Empires Tour and subsequently joined the band. In addition, the Ivor Novello and Grammy nominated songwriter has also worked with diverse artists such as Example, Robbie Williams, Biffy Clyro, Rudimental, Birdy, Kodaline, Faith Hill & Tim McGraw, Anderson East, Beoga and P!nk.