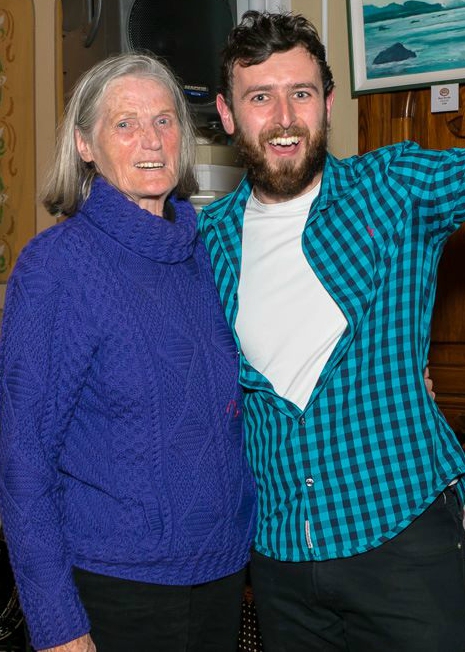 Last weekend was one like no other for local musician Jamie Mulrooney (Pontoon,Mayo) as he headed off to Carrick-on-Suir, Co.Tipperary to take part in the final of the Clancy Brothers Songwriting Competition.

Jamie’s song “The Truth Is Not Your Own” was selected from over 125 entries as winner of the competition at the festival’s highlight event on Sunday the 31st of May.

Jamie, who hails from the west coast of Mayo, was delighted with the win saying that the prize would help finance his first EP which he plans to release in January 2016.

‘It’s made a huge difference in my confidence as a songwriter and I’m going to release an EP with ‘The Truth Is Not Your Own’ as the lead track next January’, said Jamie.

The other half of Doppler is Noel Gallagher (Brackwansha,Mayo) and between them they will be playing across the country in the coming months. Jamie and Noel focus on original material with moving melodies, moody guitars and crisp, honest vocals wrapped around simple progressions that cover a wide range of emotions and genres. Honesty and sincerity are fundamental to their core values when writing music and lyrics. Speaking of the win, Jamie commented: “Hopefully we can write a few more songs like this in the coming months and keep progressing.”

The runners up in this year’s competition were ‘Make it Stay’ by Avi McGourty from Templemore, and ‘Southern Fire’ by Katie Carpenter, Gary Burke, (both members of Jezzebelle), and Liz Madden, from Dublin and New Mexico. Each received €200 sponsored by sponsored by IMRO, Music Matters Ireland and the Clancy Brothers Festival.

All three acts performed at a showcase concert in the beautiful, atmospheric Nano Nagle Chapel in Carrick-on-Suir, each playing a short set of their own songs, after which the winner was announced and prizes were presented by Mary Clancy, wife of the late Paddy Clancy.

Also playing on the night was Lisa Loughrey with The Mariannes, who won last year with her song ‘Lost With All Hands’. The Mariannes, an up and coming urban folk band with strong Irish folk, blues and alt country roots, have since launched an EP with ‘Lost With All Hands’ as the title track. Lisa used her prize from last year to help towards the cost of producing the CD.

With prizes of €500 for the winner and €200 for each of the runners up sponsored by the Clancy Brothers Festival of Music and Art, and IMRO, no one will be left empty handed. The winner also received a voucher for CD duplication from Duplication Ireland worth €215 and all three gain premium services from InMusik.co. Other competition sponsors are Music Matters Ireland and the Tudor Artisan Hub.