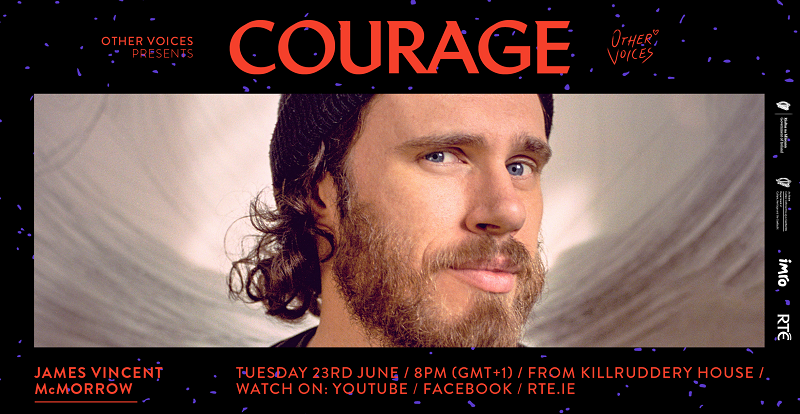 After an overwhelmingly positive response to Other Voices ‘Courage’ worldwide – with over 1.15 million views total –  it will return with a brand new series on the 23rd of June. Series two of the live streamed concerts will feature an all star lineup of artists performing in a selection of iconic cultural and heritage locations around the country.

The first episode of the second series will feature performances from acclaimed alternative folk musician James Vincent McMorrow, who is just about to release his fifth album and choice prize nominated singer songwriter Maija Sofia. They will be joining us from the beautiful location of Killruddery House and Gardens in Bray Co. Wicklow.

On Thursday 25th of June winners of the 2020 RTÉ Choice Prize LANKUM will perform live from Kilkenny Castle.

Further performances will be streamed from Glenveagh National Park, The Crawford Gallery in Cork City along with the Guildhall in Derry, the Guinness Storehouse and Swords Castle in Fingal.

Once again performances will take place on Tuesday and Thursday nights and will be made available worldwide, free of charge, due to the support of the Department of Culture, Heritage and the Gaeltacht, RTÉ and IMRO. Courage series one is currently being shown on RTÉ 2 Thursdays at 23:30.

Speaking of the project Minister Madigan said: “Building on the phenomenal success of the original Courage programme with a reach of over 2.7m, I am delighted to support this new initiative of live streamed performances from some of our best known heritage sites.  The outpouring of wellbeing created by the first series of performances will no doubt be carried through Courage 2 and reminds us that culture lifts us up beyond circumstance and challenges and is vital to the core of our collective humanity.”

IMRO Chief Executive Victor Finn said: “In times of crisis we often turn to music creators and artists for their unique ability to interpret and reflect on the world in which we live. Music is a collective experience which can overcome physical distance and is the perfect antidote to the growing sense of alienation and isolation we have all felt in recent times – even more so, now we are being asked to actively practise social distancing.  The Other Voices ‘Courage’ series brings some of our finest Irish music creators to the world stage from a number of unique locations around Ireland in what we hope will be inspiring and unforgettable performances.”

Other Voices founder and director Philip King said: “We are delighted to present this second season of Other Voices Courage as part of the Government’s response to the Covid-19 pandemic. This is about bringing people together through music, and recognising the essential and powerful contribution that artists continue to make to our lives. We are inspired by the response here in Ireland and globally to the first season of Other Voices Courage, and our artists and crews have helped to bring beauty, solace, strength and a sense of belonging to people at this time of national and global crisis – is ar scáth a chéile a mhaireann na daoine. The Department of Culture, Heritage and the Gaeltacht has played a leading and imaginative role in making it possible for our artists and crews to work together to create and present Other Voices Courage.”

Over the last decade, Dublin-born McMorrow has established himself as a multi-faceted songwriter with a vast spectrum of styles. He sings, produces, plays everything, and has a network of collaborators that stretches around the world. He’s crafted a home for himself in the worlds of hip-hop and textured r&b, even worked on Drake’s 2016 album, Views. It’s fair to say his early days of being pigeon-holed as an ‘indie folk singer-songwriter’ are long dead. He’s remained resolutely independent this whole time, self-financing his artistic ambition. But for his new record, Grapefruit Season, he felt it was time to push things up a level.  McMorrow’s internal journey of the last ten years underpins the lyrics of the album. “I have more responsibilities, people and expectations around me than ever, and the world is constantly telling me to change and grow as a person,” he explains. “But I don’t feel any more responsible or capable than I did when I was 18 years old. The record is about embracing the idea that it’s okay to not have things figured out. It’s about embracing the chaos and belligerence of life, rather than bending or changing yourself to suit what society expects of you,” he says.

Maija Sofia Makela is a musician and writer from rural Co. Galway. Her uniquely striking debut album ‘Bathtime’, a collection of songs exploring the female experience throughout art, history and folklore was released in November 2019 through Trapped Animal Records to unanimous praise across Irish and UK media. It was nominated for the prestigious RTE Choice Award Irish Album of the Year and was described in the Sunday Times as “quietly breathtaking […] the arrival of a unique new voice.”

Lankum have an alchemical ability to combine traditional folk roots with contemporary undercurrents to forge music that is dark, mysterious and transcendental.Comprising brothers Ian Lynch (uillean pipes, tin whistle, vocals), Daragh Lynch (vocals, guitar) alongside Cormac Mac Diarmada (fiddle) and Radie Peat (harmonium, accordion, vocals), Lankum channel a diverse set of influences and histories to create a beautifully rare thing: a songbook from and for the people.Their third full length album The Livelong Day, which was released on Rough Trade Records at the end of 2019 won the band the coveted RTÉ Choice Prize. The album blends alternative folk and psychedelia to cement their reputation as one of the most talked about groups to emerge from Ireland in decades. Born of years criss-crossing Dublin’s folk and experimental scenes, their previous two albums Cold Old Fire (2013, recorded under former name Lynched) and Rough Trade debut Between The Earth and Sky (2017) breathed new life into ancient/modern rituals with urban punk fervour, rural psycho-geography and, underpinning it all, the eternal drone of the uilleann pipes.