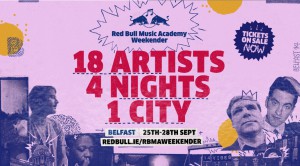 Quarter in Belfast will host four days of concerts, club nights, lectures, film screenings, a record fair, street art across the city and a photo exhibition for the first edition of the RBMA Weekender Belfast this September between 25th and 28th September 2014.

Nils Frahm, SKREAM, Terri Hooley, Greg Wilson, Ashley Beedle, Chez Damier, Ryan Vail, The Juan McLean, Timmy Stewart and Twitch represent some of the most cutting edge artists and will be among other genre defying musicians who will perform at the inaugural Red Bull Music Academy (RBMA) Weekender in Belfast.  Tickets for all live shows are now available to purchase at www.ticketmaster.ie and usual outlets nationwide.

Highlights of the RBMA Weekender will see contemporary pianist, Nils Frahm join the unique sounding Derry based, Ryan Vail in one of Belfast’s most iconic locations, City Hall.

One of the fathers of the Belfast punk movement, Terri Hooley will share a stage with fellow Belfast native, Noel Watson, a DJ best known for being one of the first to play house music in London. They will be joined by one of UK’s most celebrated house producers, remixer and DJ, Ashley Beedle and music pioneer, Greg Wilson in Aether & Echo (A&E) on the Saturday of the RBMA Weekender.

The Limelight will host one of the most prominent producers, SKREAM, house and techno stalwart Paul Woolford, who will perform under his alias Special Request and Chez Damier, a man who has mixed with the best and who will bring his classic sound of New York garage to music fans in Belfast.

The festival will kick off with the expertly assembled dance music of The Juan MacLean who will be joined on stage by Red Bull Music Academy alumni and Belfast DJ Timmy Stewart and various DJs from the hugely successful club night, Twitch.  To close the weekend, 21 Social will play host to the astonishing Space Dimension Controller.  The evening will be rounded off by local scene stalwart Barry Lynn in his Boxcutter guise, promising a tasty fusion of dubstep and IDM.

Sharing knowledge has been a pillar of the Red Bull Music Academy since day one, so throughout the RBMA Weekender, an array of pioneering artists, producers and music industry personalities will participate in public seminars where they will discuss their creative process, musical influences and inspirations and much more.  The programme has been tailored to suit all tastes and which perfectly reflects Belfast’s musical history, both past, present and future.  Taking place in the Oh Yeah Music Centre (Gordon Street) the lecture session will include music legends, Greg Wilson, Noel Watson, and Terri Hooley.  Local duo Bicep will also host a workshop on their craft.  Admission is free for all sessions but those interested in attending should email moc.ymedacacisumllubder@ofni to reserve their place in advance.

Bombin’, Beats and B-Boys:  Music has been a unifying force for as long as it has existed, but when that sense of unity is required on your own doorstep, it takes on a new significance. This enthralling documentary captures how hip-hop and its associated art forms – from taggers to break-dancers – enchanted cross community relationships in Belfast, while The Troubles raged outside.
Diggin’ in the Carts:  Ever wondered about the origin of the bleeps and bloops that soundtracked your greatest triumphs/wall-punchingly frustrating failures while playing classic video games like Metroid and Tetris? RBMA’s new series of short films Diggin’ in the Carts delves into the stories and people behind the world of 8-bit console soundtracks, with interviews from Nintendo composers and guest appearance from some well-known gamers.  Each episode will run consecutively and be screened as one film.
The Light Of My Eyes:  Written & Directed by Daniel Holmes, this is a short film seen from the eyes of a man with synesthesia – the ability to see sound.  Shot & produced in Belfast with a variety of local talent in front of and behind the camera, this is the film’s Northern Ireland premiere.
Good Vibrations:  A film as much about a music-loving man with a dream as it is about achieving that dream during the height of The Troubles.  Good Vibrations encapsulates both the comedy and the tragedy of Belfast.  This is the story of Terri Hooley – from his introduction to punk, through his role as mentor to many burgeoning young bands from Northern Ireland and the toll that his passion took on his own personal life.

Street Art:  As part of the RBMA Weekender, local street artists DMC (Dermot McConaghy) and KVLR (Kev Largey) have reimagined some of the outdoor space on Lower Garfield Street, Church & North Street and Kent Street, celebrating the true essence of the Red Bull Music Academy.
Record Fair:  On Saturday (27th September), the Oh Yeah Music Centre will host the Belfast Record Fair. Starting at 12pm, it will be the perfect spot for music fans to purchase some rare collections.
For The Record photo exhibition:  Last year and in celebration of its 15th anniversary, the Red Bull Music Academy paired up a compelling selection of top artists and industry insiders, curating conversations on some of the most relevant topics in music. For The Record features personalities like Nile Rodgers, Erykah Badu, DJ Harvey, Lee ‘Scratch’ Perry, Cosey Fanni Tutti and Just Blaze in conversation with their peers. Together with stunning visual design, it makes for one of the most insightful publications on the current state of music and the music industry. Throughout the RBMA Weekender, a selection of the stunning images from the publication will be on display in the Oh Yeah Music Centre.

What difference does it make? A film about making music

The Mac Film Venue // 7pm
Tickets are free and available online at www.themaclive.com or direct from venue

Bombin’ Beats and B Boys

The Mac Film Venue // 7pm
Tickets are free and available online at www.themaclive.com or direct from venue

Diggin’ in the Carts
The Mac Film Venue // 7pm
Tickets are free and available online at www.themaclive.com or direct from venue

The Light of My Eyes followed by Good Vibrations
The Mac Film Venue // 7pm
Tickets are free and available online at www.themaclive.com or direct from venue

Additional information for all events can be found at www.redbull.ie/rbmaweekender
Tickets for live shows are now available to purchase at www.ticketmaster.ie and usual outlets nationwide. A limited number of tickets will be available at the venue on the night of the event.