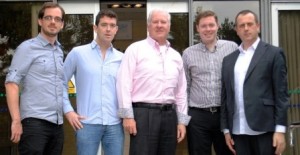 automatically sent from Radioman Cartwalls or Playlists. This includes music played during programmes from CD, downloaded from the internet, live performances and music used within edited ‘packages’.  The application generates monthly reports which are sent to IMRO & PPI who make payments to their members based on the information received.

Tracklist was developed by Radio programme teams and Radio Broadcast Services. It is web based and user-friendly and makes the reporting of manual music returns easier and more accessible.

As part of today’s launch IMRO & PPI gave presentations to staff in the Radio Centre,  both IMRO & PPI overviewed their organisations and explained how they process RTÉ’s music returns.